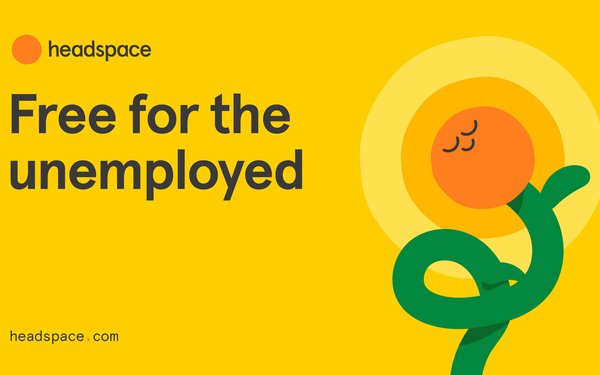 Company strategists at Headspace, the mindfulness meditation app, knows the stressed-out world could use some deep breaths about now. And since the unemployed are especially in need of a few “oms,” Headspace is offering them a free year-long subscription -- and announcing the giveaway in its first national TV advertising.

The animated spot, created by GUT, features the voice of co-founder Andy Puddicombe. It speaks right to the mental-health wallop that comes with financial uncertainty: “Headspace can’t fix everything,” the former monk says in the voiceover. “But it can help you cope with today, and whatever tomorrow brings.”

People can register with their last employer’s name to unlock the Headspace Plus subscription, which normally costs $13 per month. (A spokesperson says the company has implemented verification gates to identify fraud.)

Those new subscribers will have access to more than 1,200 hours of meditation and mindfulness content, including meditations for sleep, kids, and mindful movement. There’s a special series on living through unemployment, which include meditations like “Adapting to sudden change,” “Recovering confidence” and “Finding purpose.”

The U.S. Labor Department estimates 36.5 million people are currently unemployed due to the COVID-19 virus.

Headspace, based in Santa Monica, California, says it decided to make the offer after its research found 59% of Americans say mental health is more important than ever since the pandemic began. The giveaway fits into its new “Headspace Promise,” an ongoing commitment to caring for America’s mental health by helping communities who need it most, the company says.

Headspace is already offering free subscriptions to healthcare workers in the U.S., U.K. and France, as well as to educators (K through 12) in the U.S., U.K., Canada and Australia. It also created special content and partnerships for areas especially hard hit by COVID-19, including New York and Michigan.

The company, which has an estimated two million monthly subscribers, says 65 million people in 190 countries have used its app. Consumer partnerships include Nike, Apple, Amazon and the NBA. And through Headspace For Work, its B2B program, it works with companies like Starbucks, Unilever and GE.