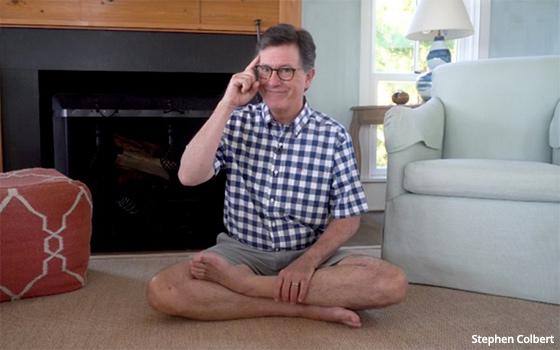 Today's TV Blog is brought to you by yesterday’s TV Blog.

The topic of this blog came to mind while I was in the process of writing yesterday's TV Blog about TV shows with the word “celebrity” in their titles.

Today's subject took shape as I was perusing the photos that Fox made available for “Celebrity Watch Party,” the network’s couch-based, pandemic-era show in which celebrities (and I use the term loosely here) are seen watching TV at home and commenting on what they are watching.

I chose a photo of Apple co-founder Steve Wozniak and his wife, Janet, for the TV Blog published yesterday here. But almost any of the photos in the Fox publicity cache would have worked just as well to illustrate that show, and today, to illustrate the point of this blog.

While looking at the photos, I was struck by how unglamorous our world is now. While the deglamorization of our culture has been underway for some time, the current pandemic just might complete the process.

With all due respect to Woz and the other celebrities (and pseudo-celebs) who have appeared on “Celebrity Watch Party” in their sweatpants, shorts and shower shoes, I cannot help but wonder if there is not a better way for these public (and semi-public) figures to put themselves together when faced with the prospect of appearing on network television.

Certainly, this type of pandemic-produced content is meant to reflect the ways in which the shows' audiences are living their own homebound lives right now. Popular television is often a reflective medium holding a mirror up to its audience.

Another recent example was last Friday's prime-time special on CBS called “The Greatest #StayAtHome Videos,” which showcased home videos made by ordinary people during the pandemic.

To host the show, CBS sitcom star Cedric the Entertainer, 56, was seen on a couch, apparently in his own home, unshaven and wearing a bathrobe and backward baseball cap.

Seeing Cedric in this way was jarring, to say the least. This is not the way we have long been accustomed to seeing this consummate entertainer (a word that is literally part of his adopted name).

Instead, he looked like anyone sitting at home who is not expecting guests. In other words, he looked just like the rest of us.

And that's the problem. For decades, one of the fundamental characteristics of the relationship between celebrities and the rest of us was that they led glamorous lives and we did not.

When contemplating this subject over the last few days, I remembered old movies from the 1930s, either real or imagined, that depicted the world of old-time network radio.

They would have these scenes in which the announcers and stars of the old radio shows would perform in tuxedos and gowns -- on the radio.

Whether or not they really did this is beside the point. But in the movies they dressed this way. And they in no way wished to position themselves as just like the people who bought the tickets to see them in the movies.

The opposite is true today. For years, public figures and their handlers -- TV and movie stars, politicians, top athletes -- have sought to craft public images that would make them more relatable to the ordinary folk who watched their shows, bought tickets to their movies and ballgames, and voted for them.

Now, in the midst of a pandemic that has largely adopted a “we're all in this together” mindset, celebrities and stars are all over TV and other media showing us their families, the interiors of their houses and, in some cases, their bare feet (as in the photo above of Stephen Colbert on a recent CBS “Late Show” from his home).

This up-close-and-personal trend is also apparent in the proliferation of podcasts and other instant media in which the stars of TV shows talk for hours about how they made their shows -- including dissecting scenes, telling stories about the details of the shows' production and other minutia.

Nothing is private anymore. No barriers exist anymore between the public and its stars. Instead, the stage doors and front entrance gates have been thrown open.

As a result, there is no mystery anymore in our relationship with the rich and famous, and no glamor either.