The 'Superspreaders' You WANT To Meet 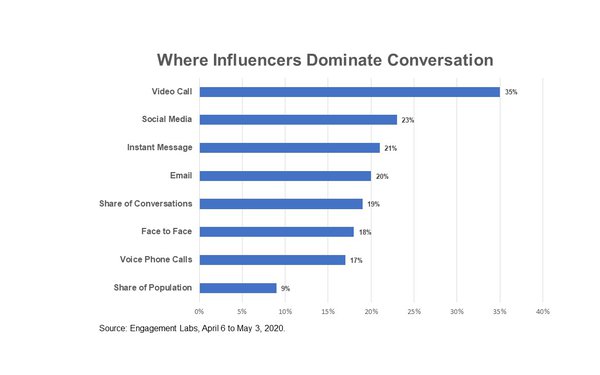 The global pandemic has justifiably given a bad name to “superspreaders,” the term for those people who tragically and efficiently spread the virus that causes COVID-19. But there’s another type of superspreader that marketers should seek out today: the one in 10 most influential consumers, who are the most efficient for spreading ideas and advice about brands.

As our nation prepares to tackle the next phase of our economic and health care response to the coronavirus, these everyday consumer influencers are ahead of the curve.

These most socially connected people have always had twice as many consumer conversations as the average person, but the gap is growing. The number of consumer conversations among influencers has grown by 16% during the lockdowns, while declining 2% for everyone else. They are exploring and discussing the brands that will be part of their new lifestyle, and then the lifestyles of the nation.

How are they doing it? As always, the vast majority of their conversations happen offline, whether over the backyard fence—with social distance—or through private digital channels such as email and private messages.  During the pandemic they are jumping out ahead of other consumers and now represent 35% of video call conversations, despite being just 9% of the total population, 4x the expected share.

Another important characteristic is their embrace of new technologies, and video calls—particularly the meteoric rise of Zoom since the pandemic.

Influencers lead the way in category after category

In recent weeks, the technology category overall has earned 30% more conversations among consumer influencers versus a year ago, while declining by nearly 10% among everyone else. Other rapidly growing categories among influencers in April versus a year ago are health (+50%), household products (+42%), beauty (+39%), media/entertainment (+34%), and food/dining (+32%). In addition, influencers are talking more about several categories that are declining among other people, include telecom, shopping, the home, even travel.

Consumer influencers are a key target for marketers because they drive so many conversations and recommendations, and their advice is heeded. Their impact on purchases can be measured: Attention from everyday influencers has been shown in market mix models to predict sales.

Marketers have ample tools to reach these everyday influencers.  More than other consumers, they talk about the advertising and marketing they see. Paid advertising and earned news stories are among the most effective channels for influencing these conversations.

It has become popular to say COVID-19 “changes everything,” and no doubt it does. But one thing has not changed: the power of highly connected consumers who don’t need physical proximity to inform and motivate their friends, neighbors, and co-workers.