Peyton Manning Has Starring Role For Michelob Ultra This Sunday 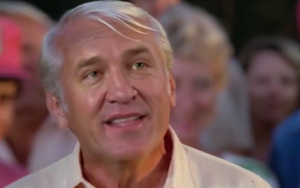 The one viewers may remember most is Manning, who will also show up in three new Michelob Ultra commercials, digitally inserted -- deepfake style -- into scenes from the classic golf comedy “Caddyshack.” (His features are integrated into actor Ted Knight’s, in the short clip Ultra is circulating on social media.)

Online, the brand is giving away a “one-of-a-kind” golf beer cart, also featured in an ad. That ad, and the "deep-fake," were created by Wieden+Kennedy New York.

The ads are also being added to Michelob Ultra’s social media channels leading up to  “The Match: Champions for Charity Tournament,” one of the first live sports events since the pandemic changed everything. The event pits Woods and Manning against Mickelelson and Brady.

The brand is adding one additional wrinkle into the telecast. If any of the golfers hit a hole-in-one, Anheuser Busch will buy everybody out there (of legal drinking age) a six pack of Michelob Ultra. The contest rules say it has set aside $1 million to pay for but  really, it’s a long shot. (For the record, Woods has hit three holes in one in his PGA lifetime; Mickelson has shot five.)

Since the COVID-19 pandemic struck, Anheuser-Busch seems to have been giving away beer left and right as part of larger promotions.

Ricardo Marques, vice president for Michelob Ultra, has an explanation for all that free beer, noting that  “while we’ve adjusted to the current climate and are cognizant of the pressures consumers are facing, we understand the role we play in bringing some joy, comfort and normalcy to them in a way that’s authentic to each brand’s voice.”

Like other corporate sponsors of the golf match, Michelob Ultra is also donating to help COVID-19 related aid efforts -- in its case, $150,00 to the American Red Cross.

"The Match represents a special moment for our national community as it reintroduces the joy of watching live sports from our homes,” said Marques. He added, "We believe that golf is best enjoyed with a beer in hand.”

Michelob Ultra is presently a star in the Anheuser Busch stable, claiming to be the fastest growing beer in the  U.S.  --and, as a premium beer that sells at a higher price point, it’s second in line when measured by  revenue.

The golf tournament itself is a better-than-average place to be seen these days.  With few live sports events available, whatever new content is out there has been drawing a larger than usual audience.

Last weekend, NBC’s telecast of "The Taylor Made Driving Relief "four-man tournament attracted 2.35 million viewers.  The network said that was 16% higher than the audience for a similar tournament last March and about the same for its average audience for its Q2 coverage of the PGA Tour last year, according to The Baltimore Sun.

"The Match: Champions for Charity Tournament will be seen on four WarnerMedia cable channels (TBS, TNT, TruTV and HLN) Sunday at 3 p.m. EST.