With Olympics Postponed, Almond Board Of California Flips To Twitch 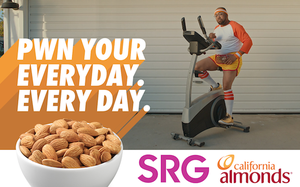 While cinemas, theaters, sports stadiums and other entertainment venues have been shut down by COVID-19 social distancing strictures, video games and online gaming are booming.

According to NPD Group, video game sales rose 73% in April year over year—surpassing the all-time record notched in April of 2008 during the Great Recession.

For the Almond Board of California—which represents nearly 7,000 almond growers and 100 processors—this upsurge was good timing.

ABoC has pretty deep roots in sporting events and programming, where it positions its protein-rich nuts as healthful energy snacks. Recent examples include its partnership with Women’s World Cup soccer player Julie Ertz and Kerri Walsh Jennings of Team USA volleyball—the latter in conjunction with the 2020 Olympics in Tokyo, which have been postponed until 2021.

Given the Olympics loss, ABoC decided to pivot some of its budget to Twitch and repurpose creative from its “Garage Sale” spots while delivering the messaging “Pwn Your Everyday. Every Day.”

On Twitch, the word “own” becomes “pwn,” (pronounced “pown”), which online gamers typically exclaim when they defeat someone.

In this interview, ABoC North American director of marketing Jenn Freeman and Susan Peck, director of media at the Sterling-Rice Group agency, discuss the value of engaging with online gamers and audiences.

CPG FYI: What is your strategy for marketing with events?

Jenn Freeman: We have found that it works really well to attach ourselves to large sporting events. The nice thing about the events we’ve worked with, is it also matches up well with our consumer target.

CPG FYI: Who is that target?

Freeman: We call them the busy balancers. It’s typically millennials. From a psychographic perspective, they’re people who are very busy, they’re always on the go, their lives are pretty demanding and they very rarely sit down and eat three meals a day.

They’re sort of constantly snacking.[Almonds] have a good amount of protein and are filling. So it’s this natural fuel that keeps them going.

CPG FYI: What are the roadblocks to big sports sponsorships?

Susan Peck: We don’t have giant budgets, so we try to be where these cultural moments are happening. It’s hard to be an NFL sponsor, but we were part of the NFL draft this year and it had big viewership. We’ve also done a lot of NFL fantasy-type programs before with ESPN and the NFL.

CPG FYI: What attracted you to Twitch?

Peck: We have had our eye on esports for a long time. When the Olympics were postponed, we had some budgets that were available so we had to pivot [beyond] these large, mass-reach vehicles, paying attention to what people were doing at home.

What we were seeing is that people were gaming more than ever and others were enjoying watching the gamers on Twitch. So it was a perfect way to bring in that sort of passive and active audience in esports.

The timing worked well for us with people seeking something exciting, something different than reruns of a lot of syndicated programs.

CPG FYI: Is Twitch a place where you’ll see healthy snacks being advertised?

Peck: We did not see anything. When we did our own audit on that platform, we saw a lot of energy drinks and snacking. The truth is that people who are gaming are not necessarily young boys in their basement gaming in the dark of night. It is everyone.

We really felt this was an opportunity to put out a healthy snacking solution. We know they’re snacking. So why not give them the option of grabbing a healthy snack?

CPG FYI: You’re also leveraging influencers on Twitch? How did you select them?

Freeman: We chose them based on which ones are well known on Twitch—not  only for their gaming, but also for their streaming and their interests in health and wellness. That’s a nice match and natural integration for us.

I was surprised there’s a quite a few influencers on Twitch who are very much into health and fitness—and some of them stream while they’re working out. One is an avid runner and another is a pro body builder. The people who are very familiar with Twitch know that these influencers are not just gamers. They know about their lifestyles as well.