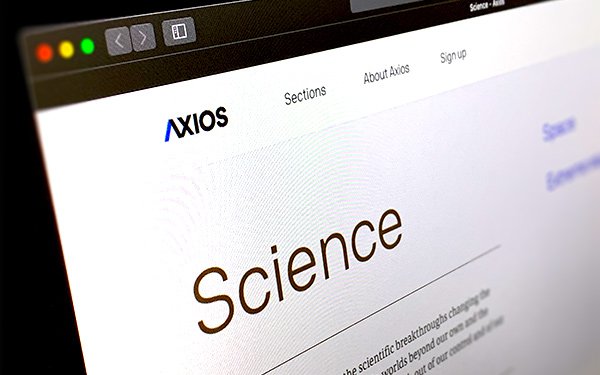 Another newsletter, Axios @ Work, debuted May 5. It explores the economic and social shifts affecting the workplace.

Axios editor in chief Nicholas Johnston called the newsletters a “triple threat of topics that matter right now” in an interview with Publishers Daily.

The three weekly newsletters serve Axios’ audience of “smart, curious people who want to get smart faster on the topics that matter," he said.

Axios now has 21 newsletters in total. They are written in Axios’ “smart brevity” style -- to the point, condensed articles that get to the heart of the topic and why it matters.

The goal is for the newsletters to be accessible to both industry experts and readers interested in the topics.

"We pretty continuously have a pipeline” of potential newsletter topics, Johnston said. Every few months new trends come up that “people need to understand,” and Axios finds experts to write newsletters on those topics.

Axios Science was relaunched last Thursday. Science editor Alison Snyder is returning to the newsletter, which she originally authored for a year beginning May 2017.

It was the first newsletter released after the first few core newsletters created by Axios, Johnston noted. Axios Science was written by Andrew Freedman until he left for The Washington Post in 2019.

In version 2.0, Snyder is looking at bio-medicine, public health and emerging technologies as the world grapples with the ongoing pandemic.

Axios Science and Axios @ Work were under development since late last year. The relaunch dates were moved forward when COVID-19 struck. “Now it makes even more sense to launch [Axios Science], to focus on the science of the pandemic,” Johnston said.

Axios Codebook covers the latest in cybersecurity, authored by Zach Dorfman. The newsletter is a partnership with the nonprofit Aspen Institute. It originally launched in May 2018 and returned today.

Axios @ Work launched with Slack as its sponsor. It focuses on workplace trends, such as how companies deal with diversity inclusion, hiring, training and remote workforces.

When “we all went home because of the pandemic, these trends became amplified,” Johnston said. “It became even more important to create an editorial project around this.”

The newsletters are also available on the Axios App.