Restaurants Without Masks: What Are They Trying To Say? 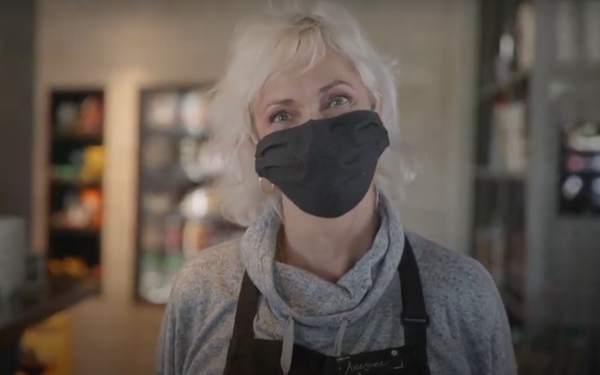 I ordered a pizza the other night from my family’s favorite local joint -- my first takeout in months. I phoned in the order, masked up and went to retrieve it. Behind the counter, six workers packed the tiny kitchen -- not one of them wearing a mask. Horrified, I paid and retreated, sorting through my reaction as I drove home.

Was I angry? Definitely. They were in violation of my state’s rules, and perhaps endangering the public -- me included. Was I afraid? A little. I might have just spent two minutes in a COVID mist. But mostly, I was baffled. What did those employees -- and the restaurant owner -- think they were communicating? I asked Aaron Allen, a restaurant consultant based in Chicago, what it meant.

QSR Land: It felt like the unmasked pizza people were saying, “F*&k you.” Am I reading that right?

Aaron Allen: Yes. Health officials have made it clear that the masks are not to protect you, but others. So not wearing a mask, you are basically putting your middle finger up to the guest. They might as well rub the pizza under their armpit or something -- it’s the communication equivalent of that. Unfortunately, the mask -- a hygiene issue -- is being turned into a political statement.

QSR Land: While most QSR chains are requiring workers to wear masks, this pizza place isn’t alone. A restaurant in Dallas is forbidding its workers from wearing masks, and a brewpub here in Maine just lost its health license because of this. Is this trend increasing?

Allen: It's fascinating how polarizing this is. But no, I think we’re seeing a few restaurants trying to make a statement. They’re like that jerk at the beach, insisting they won’t wear a mask. And it gets them on the news.

But this is a hygiene issue. And with restaurants having lost half their revenue, they understand that they have to create a sense of safety and security. People think the most important thing for restaurants is to be friendly and have pretty good food. But it’s not -- it’s safety, just like the airlines.

QSR Land: Besides a little publicity, is there anything to gain from a no-mask stance? I mean, they’re appealing to somebody, right?

Allen: There's no good reason, other than a political statement. And frankly, there’s not a lot of room for that in restaurants. Especially since empathy and being of service is so much a part of the business. But being contrarian does get you attention -- it’s like the Heart Attack Grill, started as a reaction to the industry trend of healthier eating.

QSR Land: But you believe masks will become the norm?

Allen: Yes. In the same way that wearing condoms became the norm, because of the AIDS epidemic. And masks will just become part of the uniform, which Burger King is already considering.

QSR Land: How will that happen?

Allen: It might be by legislation. Or litigation, in terms of civil suits from consumers and employees who get sick. And if business interruption insurance didn’t cover restaurants at the start of the pandemic, what makes them think liability insurance is going to cover them from this kind of lawsuit?

The average food-borne illness outbreak costs a restaurant about $2.4 million -- and the average restaurant only makes $1 million. Chipotle just had to pay $25 million in charges related to its food contamination problem.

And eating the fecal material on the soda machine won't kill you. But COVID will. And because we all have cameras, the risk is even greater. You could have snapped a picture of those people with your phone, and had it circulate among thousands of people.

Allen: We just finished some research, and found that 65% of all publicly traded restaurant companies in the country are in the distress zone. And we think 30% of those could go bankrupt.

covid-19, fast food, qsr, restaurants
1 comment about "Restaurants Without Masks: What Are They Trying To Say?".
Check to receive email when comments are posted.
Next story loading