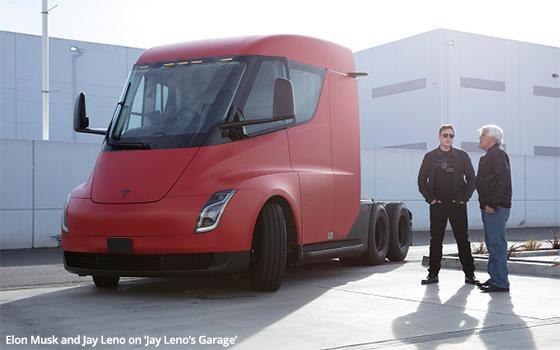 Media impressions are often fast and fleeting, and leave an impression of a person or event that is frequently incomplete, and as a result, inaccurate.

For example, according to where you might encounter him on TV or elsewhere, Elon Musk is either an unglued, self-destructive Twitter maniac, a hopeless contrarian who is so eccentric that he blithely names his own child after what looks to be an algebraic equation, or a very enthusiastic genius and charismatic visionary who believes that anything is possible and exudes an infectious optimism about the future of mankind.

The latter Elon Musk was the one who showed up for a sensational and fascinating appearance on “Jay Leno’s Garage” this week on CNBC. For many, it may have been the first time they ever came across this version of Musk in our popular media.

This is a guy who evidently has a great deal of fun in the pursuit of his own dreams. Watching him as he discussed Tesla’s growing line of EVs -- sedans, a futuristic pickup truck (known as a “cybertruck”) and an electric semi (pictured with Musk and Leno in the photo above), it was easy to become caught up in the man’s sunny outlook.

Leno joined the Tesla electric vehicle innovator at his California headquarters, where the two talked about the various Tesla products from both a general and technical perspective.

The vehicles that had been arranged on display in an outdoor parking area for the show included sedans of various sizes and price points.

At such times, Leno’s knowledge and understanding of advanced automobile mechanics never ceases to amaze.

At one point while the two discussed a high-performance sports car, Musk divulged that the car will come with rocket thrusters.

When Leno very logically asked how the thrust would be produced since the car does not run on any kind of conventional fuel, Musk explained that the system would be air-powered.

The TV Blog has little or no understanding of such things, but Elon Musk apparently does. Even more importantly, he makes you believe in the impossible. Rocket thrusters on an electric roadster? Sure, why not?

On the show, Musk came across as a very high-energy guy -- the kind of person many of us would like to spend time with, or possibly even work for.

By contrast, in other media, he is not so attractive. The Wall Street Journal, for example, tends to report almost solely on Musk’s run-ins with federal regulators who accuse him of purposely trying to manipulate the price of Tesla shares when he posts tweets.

The version of Musk that you read about in the WSJ can have you wondering how on earth this guy retains control of his own company.

On “Jay Leno’s Garage,” Musk invited Leno to take the Tesla cybertruck prototype for a spin, which included a jaunt through one of the futuristic tunnels Musk wants to build under major cities to accommodate electric autonomous vehicles.

These tunnels, one of which has already apparently been dug under a portion of Los Angeles, are like something out of science fiction. But on the Leno show, the tunnels suddenly made sense thanks, in part, to Musk’s contagious confidence in them.

So who is Elon Musk? Eccentric Twitterer? Iconoclastic baby namer? Likable inventor? The apparent answer: All of the above.