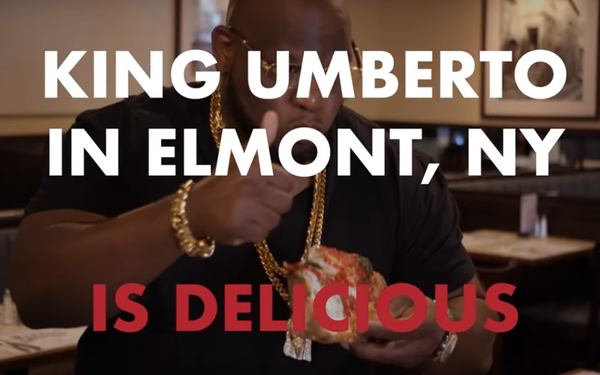 As restaurants begin to reopen nationwide, Vice TV has shifted its usual marketing activity for the culinary series “F*ck That’s Delicious” to a series of ads targeted to promote 20 local restaurants in five states.

The ads on digital and social platforms contain a call to action to support the Restaurant Workers’ Community Foundation, which launched a COVID-19 crisis relief fund in March for restaurant workers and small-business owners.

Each of the 20 restaurants in California, Connecticut, Massachusetts, Pennsylvania and New York are featured in the current season of “F*ck That’s Delicious,” hosted by chef and rapper Action Bronson.

The campaign spots feature scenes from the series shot long before the onset of the pandemic. Among the 13 restaurants in New York are King Umberto and Toma-Tis—both located on Long Island.

“When we started thinking about this, we realized that a lot of these restaurants are closed down and struggling. So we felt we needed to change the message to support some of the key restaurants featured in the show,” Vice Media Group CMO Guy Slattery tells Marketing Daily.

Instead of targeting ads to DMAs to promote the current season of “F*ck That’s Delicious,” “In this case we went hyper-local, targeting ZIP codes and geographic areas close to the restaurants so we would hit people who could be potential customers of the restaurants,” says Slattery.

In a statement issued by Vice, Bronson said, “Our food industry brothers and sisters need our help. We all wanna get back to normal and that means helping the hundred of thousands that lost their jobs.”

“He has a huge social media presence with millions of followers,” says Riko’s co-owner Luigi Cardillo. “He’s a good guy, a good soul. At this point in the pandemic, every little bit helps.”

Since Riko’s built its business on takeout and delivery, “we were able to weather the storm, keep all our employees working and serve the community. Now we’re trying to figure out how to serve the community with outdoor seating and taking it one day at a time,” says Cardillo.