Times Square's Vibrant Billboard Network: How Bright Will Its Future Be? 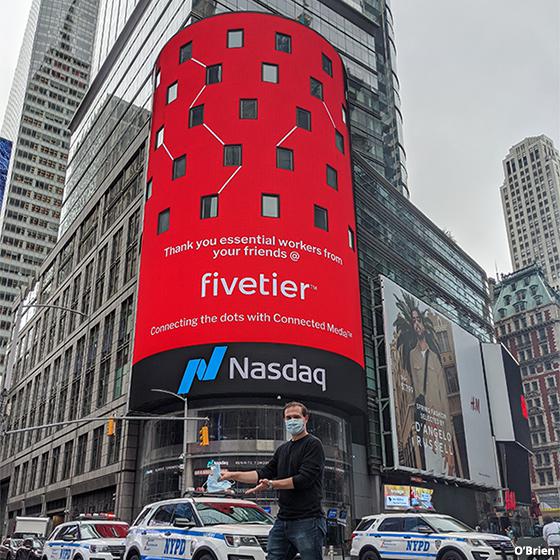 Although marketing software company Five Tier’s specialty resides in connecting media among multiple devices and channels through one platform, it is best known for its Times Square OOH footprint. Brands are able to select placements then upload creative to easily take over the world’s biggest large-format ad network.

Five Tier CEO Frank O’Brien cites 2018’s “Jarlsberg Tasting Room” as a turning point in his company’s evolution.  Five Tier turned a modest billboard budget into a full-fledged technology-driven campaign that focused on luring cheese lovers to Times Square. Viewers on the street could sign up for a tasting with online registration and mobile messaging that displayed their names on one of the massive Times Square billboards when their table was ready.

Most recently, Accor Hotels took over the New Year’s Eve ball drop with a 360-degree campaign that came together relatively swiftly and garnered hundreds of millions of worldwide impressions.

Similar to others, Five Tier clients had differing responses to the situation. Nearly a third decided to postpone or cancel planned campaigns, while another third took advantage of scheduling for future dates, most commonly after October. The remaining third shifted away from billboards to take advantage of Five Tier’s other connected media opportunities, such as mobile, TV and streaming radio. “The couch was the new Times Square during the lockdown,” quips O’Brien.

Although Times Square was not part of the media plan, client Trane continued to move forward with its planned campaign despite the COVID-19 pandemic. O’Brien admits he cautioned them against the timing coinciding with the height of the crisis in the U.S., but it turned out to be extremely successful for the HVAC (heating, ventilation, air conditioning) brand, which leveraged highly targeted, ConnectedTV spots that were then attributable back to sales using geospatial attribution — being able to tell who saw a spot, then immediately booked a service from their couch

While COVID-19 has had its negative impacts, O’Brien believes in the long run this crisis will ultimately benefit his company by accelerating awareness of its diversified offering.

“We somehow became a poster child of the billboard industry, but for years we have been connecting all forms of media,” he says.