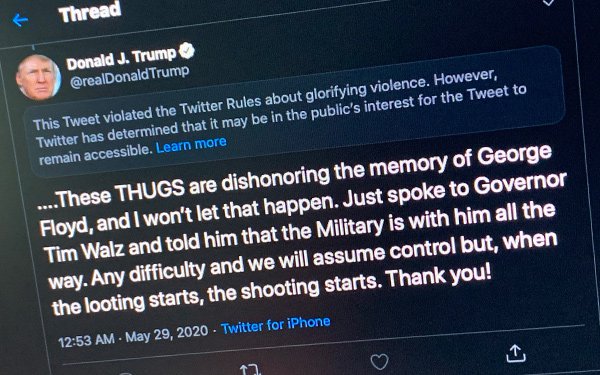 Escalating a battle with President Trump, Twitter just added to the list of warning labels it is willing to attach to his tweets.

Tweeting after midnight on Thursday, Trump endorsed the shooting of people looting businesses amid the growing protests in Minneapolis.

“These THUGS are dishonoring the memory of George Floyd, and I won’t let that happen,” he declared.

Twitter added the label despite the fact that Trump signed an executive order designed to regulate speech on social platforms, on Thursday.

The order was clearly a response to Twitter’s decision to begin applying its standard content policies to the President, earlier in the week.

Until this week, Twitter had maintained that prominent figures like Trump were largely exempt from its content policies, because their tweets were of historical significance and often in the “public interest.”

For Twitter, the decision came amid a growing backlash over its unwillingness to police Trump’s more outrageous tweets.

Transcending the country’s political and ideological divides, a chorus of critics took issue with Trump’s tweeting of baseless theories that MSNBC “Morning Joe” host Joe Scarborough murdered a woman in 2001.

Among government officials, responses to the executive order appear to be more partisan in nature.

Jessica Rosenworcel, one of the Federal Trade Commission’s Democratic commissioners, said in a statement: “An executive order that would turn the Federal Communications Commission into the President’s speech police is not the answer.”

Brendan Carr, a Republican FCC Commissioner, came out in favor of the order. In one tweet, he described Twitter’s policy change, this week, as a “tactic” to “control the political narrative.”

The order calls for the FCC to propose rules about when and how social media companies may edit content online without forfeiting their protections under Section 230 of the Communications Decency Act.

Section 230 protects social-media companies from legal liability for the material their users post.

For his part, Twitter cofounder-CEO Jack Dorsey tweeted this week that the intention of the policy change “is to connect the dots of conflicting statements and show the information in dispute so people can judge for themselves.”

“This does not make us an ‘arbiter of truth,’” Dorsey asserted.