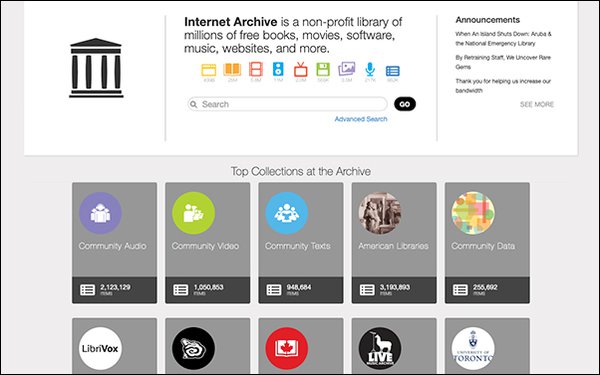 “Defendant pays for none of the expenses that go into publishing a book and is nothing more than a mass copier and distributor of bootleg works,” Hachette Book Group, HarperCollins Publishers, John Wiley & Sons and Penguin Random House allege in a lawsuit brought Monday in federal court in Manhattan.

The publishers are seeking monetary damages and an injunction prohibiting the Internet Archive from scanning and distributing print books.

The Internet Archive has been scanning and then lending digitized versions of books since 2011, through its “controlled lending program.”

For that initiative, the organization only lends out one digital copy at a time for each hard copy that has been scanned.

This March, as the COVID-19 pandemic shuttered libraries nationwide, the Internet Archive launched its “National Emergency Library,” which offers downloads of the same scanned hard copy to multiple users at once.

The publishers are now challenging both initiatives.

They say the “controlled digital lending” program operates under rules that “have been concocted from whole cloth and continue to get worse.”

“No provision under copyright law offers a colorable defense to the systematic copying and distribution of digital book files simply because the actor collects corresponding physical copies,” the publishers write.

They add that the Internet Archive “opportunistically seized upon the global health crisis” to expand its digital lending program.

The Internet Archive said in March the new emergency lending initiative would help ensure “that students will have access to assigned readings and library materials” and that “people who cannot physically access their local libraries because of closure or self-quarantine can continue to read and thrive during this time of crisis.”

The organization added: “We recognize that authors and publishers are going to be impacted by this global pandemic as well. We encourage all readers who are in a position to buy books to do so, ideally while also supporting your local bookstore.”

“As a library, the Internet Archive acquires books and lends them, as libraries have always done,” he says. “This supports publishing and authors and readers. Publishers suing libraries for lending books, in this case, protected digitized versions, and while schools and libraries are closed, is not in anyone's interest.”

Should the case move forward in court, the Internet Archive might argue its programs are justified as a “fair use,” given the public health crisis and its nonprofit status.

The publishers' complaint attempts to preempt that potential argument. They write: “No concept of fair use supports the systematic mass copying or distribution of entire books for the purpose of mass reading,” the complaint states.

Hachette and the others add that the Internet Archive's digitization isn't transformative, arguing the organization "does not add something new to the plaintiffs’ books, with a different purpose or character."

Several years ago, Google successfully argued its book digitization project -- which involved scanning hard copies of books, making them searchable and then displaying snippets in response to search queries -- was protected by fair use.

But Google, unlike the Internet Archive, did not allow users to download entire copies of books under copyright.

Additionally, the judges who ruled in favor of Google said the company's copying of books was “highly transformative,” because digitizing the books made them searchable.

"The purpose of Google’s copying of the original copyrighted books is to make available significant information about those books, permitting a searcher to identify those that contain a word or term of interest, as well as those that do not include reference to it," judges in the 2nd Circuit Court of Appeals said in a 2015 ruling that sided with Google in a lawsuit brought by the Authors Guild.