Automaker TV Spending Down 60.5% In May 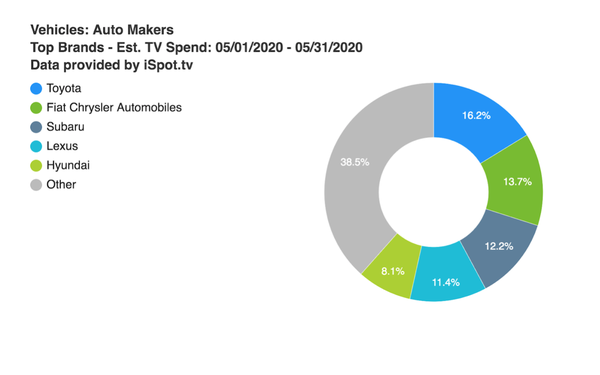 COVID-19 continued to take a toll on automaker TV spending and impressions in May.

In 2019, about 37% of auto maker ad spend in May came during sports-related programming, with the NHL and NBA Playoffs making up over two-thirds of that total, says Stu Schwartzapfel, senior vice president, media partnerships, at iSpot.

“Rather than invest those dollars in other shows, brands simply removed it from budgets, and then reassessed audience movement elsewhere -- like putting a greater emphasis on reality TV and movies,” Schwartzapfel tells Marketing Daily.

As both the NHL and NBA plan delayed playoffs this summer, these televised events could be places where automotive brands -- experienced advertisers with playbooks for various situations -- spend money again, he says.

While there was still a lot of COVID-related messaging among top automotive brands, creative began to return to more standard vehicle-focused ads. Hyundai’s Memorial Day sale spot had the second-most impressions of any automaker ad (4.%). Additionally, a lot of the COVID messaging began to lean away from directly addressing the pandemic and hardships, and focused more on “better days ahead/moving forward” messaging.

Even though events like live sports and prime-time shows were not on the air, the fact that more people were watching TV presented new opportunities, even as many brands decreased spend.

Hyundai decreased spend by just 2% year over year, but impressions were up 27% vs. last May. Both Fiat Chrysler and General Motors opted to run company-wide ads this May after not doing so a year ago (when only division-centric ads were run.) Lincoln and Land Rover also increased impressions and spend considerably compared to the previous year.

Brands also utilized Tier 1 spots at a higher rate in 2020 than  in 2019 -- 30% of creative was Tier 1 this year vs. 23% in May 2019. This could be due to differing reopen standards on a local level, so more brands are leaning on those Tier 1 national spots for more general messaging.