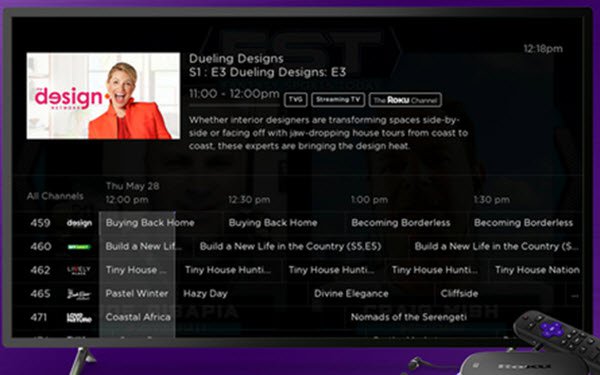 Roku is debuting a new live TV guide to assist browsing and navigation as it adds more than 30 free, ad-supported live linear channels to The Roku Channel, bringing its total to more than 100.

The guide is accessible through a new “Live TV” tile on the Roku Channel, or by pressing left on the Roku remote. It displays up to 12 hours of available content and lets users switch between viewing all channels and recent channels, as well as locate channels without returning to the guide.

“Now more than ever, it’s important for our users to have easy access to free content, such as news, and the ability to find it quickly,” stated Ashley Hovey, Roku’s director of AVOD Growth.

The new channels span news, sports, entertainment, kids and family, lifestyle and six Spanish-language channels that were launched in advance of Roku’s announcement.

Although Roku competes for viewers and advertisers with other leading AVODs, its new channels include ones from Comcast’s Xumo (such as Gravitas Movie Channel), and ViacomCBS’s Pluto TV (Xumo Free Movies, Xumo Free Westerns).

Roku already generates more revenue from advertising and licensing fees than it does from devices — $233 million versus $88 million, respectively, in this year’s first quarter — and stands to attract more as advertisers shift dollars to connected TV. Total net revenue in the period rose 55%, to $321 million, making it the company’s best first quarter for revenue growth in five years.

The Roku Channel is growing faster than the overall platform — adding 2.9 million active users in Q1, to reach 39.8 million — and saw its streaming hours double year over year, according to the company.