Why Twitter's Bar Should Be Higher For World Leaders, Not Lower 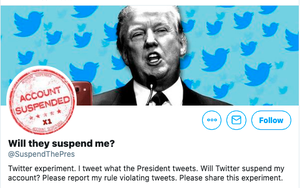 Idealists love to say "no one is above the law," but if there's anything the past few years have shown us, that's not exactly true. It's clearly not true when it comes to Constitutional law, and it's also not the case when it comes to Twitter law.

I'm among those who called on Twitter early on to suspend @realDonaldTrump because it routinely violates their own standards -- as well as the sensibility of its community, and society-at-large -- citing hate speech, incendiary language, hate speech, and, well, you name it.

The response I got then, and the one Twitter continues to use to justify not suspending the account, is that "world leaders" are immune from those rules.

And while Twitter has taken some baby steps in fact-checking and labeling the account's content, it still allows it to publish with impunity.

Never mind that the account holder has thrown a hissy fit, signed an "executive order," threatened legislation, regulatory action, and the withdrawal of federal funds over Twitter's baby steps toward containing his massively uncontrolled id -- Twitter still is not doing the right thing and suspending the account until the holder no longer is a "world leader."

In fact, I think Twitter has its rule-making backwards. It is precisely because they hold so much power that world leaders should be held to an even higher standard to be allowed to publish their missives on an open social media platform like Twitter, not that they are immune from it.

But that's my opinion.

Today, former Red, White & Blogger Philip Rosenstein pointed me to an interesting experiment taking place on Twitter by a regular grade account holder, @BizarreLazar, who has been republishing @realDonaldTrump's tweets verbatim as @SuspendThePres.

"Well it finally happened," @BizarreLazar wrote in an "experiment update" tweet, adding: "Took longer than expected. 12 hour suspension and had to delete the offending tweet. Here’s the screenshots @suspendthepres. Will post to the account when suspension is lifted."

The experiment is interesting, but as long as Twitter maintains two classes of rules, it's not especially material.

So c'mon @jack, do the right thing. Pull the thug's plug. 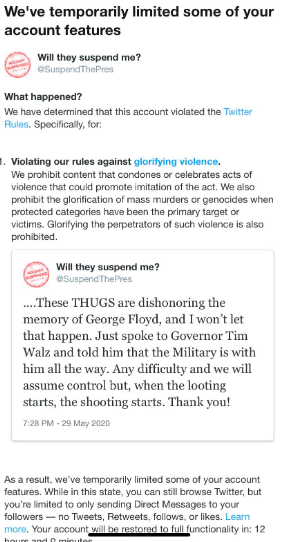