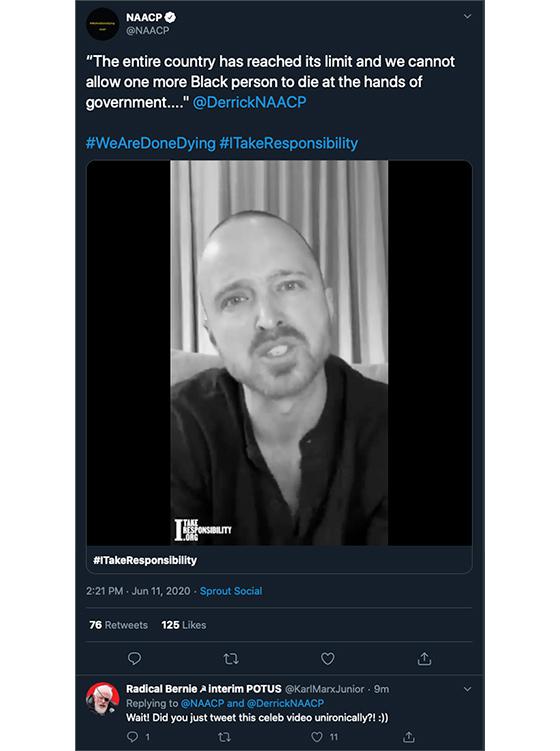 As everyone attempts to address the social justice protest movement a new well-intentioned project backed by the NAACP and Confluential Content is getting a big dose of ridicule on Twitter.

The #ITakeResponsibility PSA features a rotation of well-known celebrities, including Kristen Bell, Kesha, Aaron Paul, Stanley Tucci, Bryce Dallas Howard Aly Raisman and others acknowledging the ways they’ve perpetuated racism through their silence or inaction, and their commitment to support organizations that fight for the rights of oppressed communities.

Almost instantly upon the PSA’s release today, Twitter crackled with comments making fun of the video. As one poster on Twitter joked, “The video is in black and white. Aaron Paul gets real close to the camera. They take responsibility. They mean it. Racism is over. For reals. These celebs said so. In black and white. Sarah Paulson was even on there.”

Others commented that “Celebrities do better” and “I love how a few of them went full Actor here.” Another commenter was a tad more supportive, “True, this felt a little produced. I’m also trying to be optimistic and appreciate every person using their voice right now.”

It remains to be seen what if any impact this effort ultimately has but most of the early reaction would suggest that at the very least, SNL has a new video to parody.