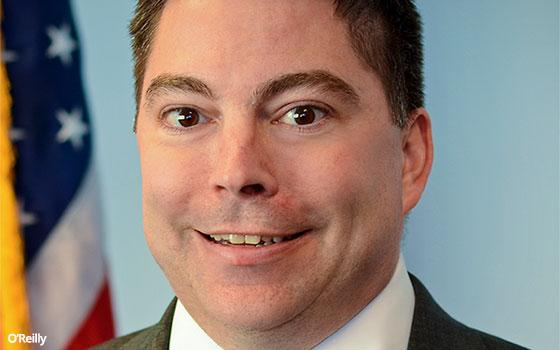 The order, issued two weeks ago, aims to task the Federal Communications Commission with crafting rules that could expose tech companies to lawsuits for posts by users.

“Did Congress provide us authority to act?” Michael O'Rielly said this week in an interview for C-SPAN's “The Communicators” series, slated to air on Saturday. “I have reservations they provided any intentional authority for this matter.”

He added that he plans to conduct more research before taking an official position on the order.

Trump's recent executive order directs the Commerce Department to petition FCC for regulations that would tie web companies' protections under Section 230 of the Communications Decency Act to the companies' content moderation policies.

Trump issued the order shortly after Twitter alerted users to dubious claims regarding voter fraud in two of his tweets. In the text of the order, Trump accuses tech companies of engaging in “selective censorship.”

O'Rielly said in the interview that he is concerned his “fellow conservatives” have been stifled online.

“That's pretty problematic,” he said. “That doesn't mean it isn't happening on the other side of the aisle as well.”

But, he added, “What we do about that is a different story.”

Factors that would go into that decision would include whether Congress authorized the FCC to act, and whether any regulations would implicate First Amendment concerns, he said.

Outside legal experts have expressed doubt about the legality of Trump's order for several reasons. Among them is that Section 230 does not have any language empowering the FCC to craft regulations. Additionally, numerous judges have already ruled that websites have the First Amendment right to decide how to treat material uploaded by users.

The digital rights group Center for Democracy & Technology sued earlier this month to block the order's implementation, arguing it violates the First Amendment.

The Association of National Advertisers, which criticized the order as "misguided,” also said it violates free speech principles.