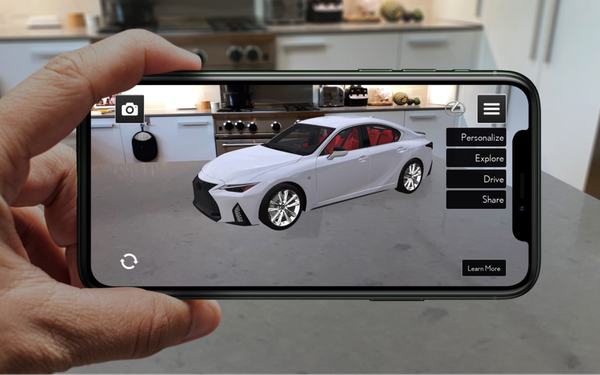 Lexus has created an immersive augmented reality app designed to virtually unveil the newly redesigned 2021 IS.

The luxury automaker had planned an online unveiling of the vehicle for June 9, but delayed it until June 15 because of the ongoing pandemic and the nationwide protests against racial injustice that began May 25.

Lexux AR Play is the first app of its kind for the luxury automaker. With social distancing the new normal across the globe, Lexus was inspired to develop the technology to showcase the newest iteration of the luxury sports sedan, which first debuted nearly 20 years ago.

The app allows users to virtually walk around the vehicle for up-close 360-degree exterior and interior views, and even open and close the doors and trunk. Audio narration explains the vehicle’s design, performance, and safety features.

Users can engage the gamification function to virtually drive the IS in augmented reality like a remote-control car.

They can also personalize the vehicle exterior with eight custom color offerings, and capture photos for sharing on social media.

“This app is a modern-day expression of a longstanding Lexus core value: ‘genchi genbutsu’ or ‘go and see’ — a practice employed by Lexus engineers to go on-site to ensure a true understanding of a situation by experiencing it firsthand,” said Lisa Materazzo, vice president of marketing at Lexus in a release. “Now our guests can experience the next best thing to genchi genbutsu with the new IS, seeing it for themselves in a way previously unavailable, and long before the vehicles arrive in showrooms in late fall.”

The Lexus AR Play app is now available for download for iOS and Android devices in the App Store and Google Play.