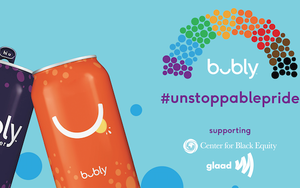 Supporters of the LGBTQ+ community can replace live marches during Pride Month 2020 by participating in the virtual Unstoppable Pride parade from PepsiCo’s Bubly sparkling water brand.

Starting today, people can dress up in parade attire and share their dance-like moves in left-to-right-screen fashion in a three-to-seven second clip on Instagram Stories and TikTok using the hashtag #UnstoppablePride.

Each video submission received by June 26 will be uploaded to bubly.com/UnstoppablePride, so participants can track the parade growth in real time. Each submission will then be strung back-to-back to create an ever-growing “truly unstoppable parade.”

On June 27, participants can watch themselves in the parade on the UnstoppablePride website.

The initiative begins the same week the U.S. Supreme Court ruled that Title VII of the Civil Rights Act—which bars discrimination based on sex—also applies to claims of gender identity and sexual orientation.

According to PepsiCo, the goal is to unite people and embrace the intersectionality of the LGBTQ+ community while supporting GLAAD—which until 2013 was known as the Gay & Lesbian Alliance Against Defamation—and the Center for Black Equity.

The Center for Black Equity is an institution committed to supporting leaders, institutions and programs for health, economic and social equity for LGBTQ people of African descent.

“We are proud to partner with GLAAD and The Center For Black Equity to help build a more equitable future,” Stacy Taffet, vice president, water portfolio for PepsiCo, said in a statement.

In a separate initiative, PepsiCo’s SodaStream sparkling and carbonated water maker has released a limited edition "For the Love of Tomorrow" kit.

Available only online for $24.99, the kit contains SodaStream's newest 0.5-litre reusable bottle plus a reusable bag and straw,  in a recycled carton.

All profits from the kit sales benefit The International Lesbian, Gay, Bisexual, Trans and Intersex Association.