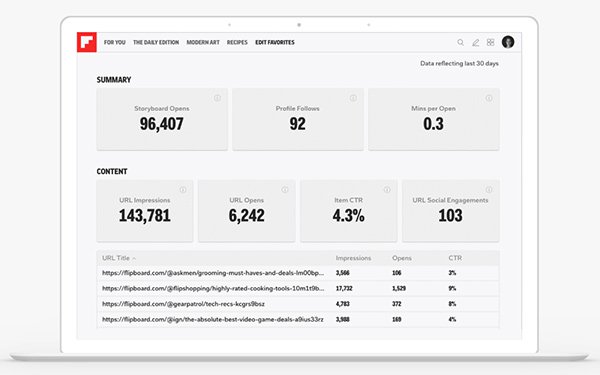 Flipboard has unveiled a curation tool for publishers to package articles, images and videos into new “Storyboards” around a timely issue or event.

Flipboard has also released an analytics dashboard that provides insights into engagement with Storyboards and the content within them. The dashboard displays audience metrics like demographics, the number of views, opens and social engagement, such as likes, comments and “flips” on the Flipboard platform.

Aggregated content on Flipboard is typically curated into magazine-like packages. The magazines are updated in an “ongoing way” — users and publishers can continue to add articles and videos on topics like climate change or vegan recipes.

Storyboards are more finite and “of a moment in time,” Flipboard vice president of content and communications Marci McCue told Publishers Daily. They serve as “published collections of content.”

Over 100 publishers tested the new tools in beta for the last three months.

Publishers wanted a way to package content around an issue with a “beginning, middle and end… rather than a repository with all the stories on this topic,” McCue said.

Storyboards also “give curators a voice,” by allowing them to write a headline and description, as well as add a main image, topic tags and URLs. The URLs can be links to articles, videos, livestreams, products, photos, Flipboard magazines, social posts and newsletter sign-up pages.

These items can be organized into “sections” with up to 10 links in each.

CNBC’s Storyboard “George Floyd: Seeds of Change,” for example, has sections like “Leaders Speak Out” and “Talking to Your Kids.”

National Geographic created a section in a Storyboard about Mount St. Helens with content for subscribers.

Gear Patrol created one called “This Week in Gear,” with the best stories and videos published in the week.

Previously, publishers had access to basic analytics on content shared on Flipboard, noted McCue. The new dashboard lets them see “what’s works and what doesn’t” on the platform. Before, publishers may have seen “a huge traffic spike” on the platform but not known what led to that growth.

“Now, they can look and see that this Storyboard created new followers, these videos were heavily watched, this type of archive material was popular on the Storyboard,” McCue said.

The Curator Pro tool rolled out today to publishers, bloggers and influencers in the U.S., Canada, U.K. and Australia.

It will be available in Germany, France, Italy and Spain later this summer, with more countries to follow.