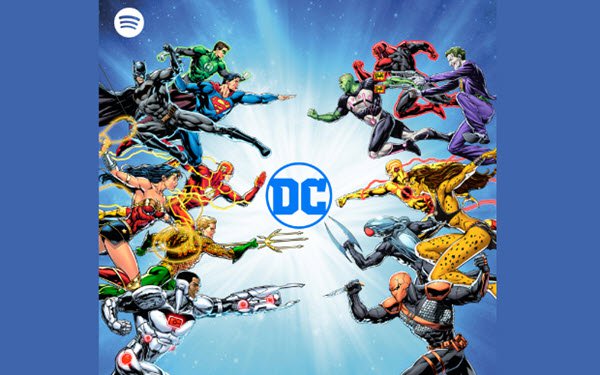 Spotify is on a roll.

Earlier this week, Spotify added video to its self-serve ad platform, and The Wall Street Journal reported that the streaming platform had landed an exclusive podcast deal with Kim Kardashian West.

Now the company — which has already spent more than $600 million over the past year to buy podcast companies and content to feed its strategy of expanding beyond music offerings — has announced another podcast deal: This time with Warner Bros. and DC.

As a result of the buzz, Spotify’s shares hit a new 52-week high on Thursday, up more than 12% by end of day, noted CNBC.

The latest multi-year deal calls for Warner Bros. and DC to produce and distribute an original slate of narrative scripted podcast shows exclusively for Spotify.

The content will be based on DC’s comics franchises, which include Superman, Wonder Woman, Batman, The Joker and Harley Quinn, among others.

The partnership is the first to involve the intellectual property of the entire DC Universe, according to Spotify.

Warner Bros. Digital Networks (WBDN) will manage the partnership’s business and strategy. Warner Bros. Television Group’s digital studio, Blue Ribbon Content (BRC), will oversee the creative and co-develop and produce the programming in collaboration with Spotify, which will be responsible for the marketing, advertising, and distribution of the shows exclusively on its platform.

Kardashian West’s deal with Spotify Technology SA is for a podcast series focused on criminal justice, which she will co-produce and co-host with  television producer Lori Rothschild Ansaldi, knowledgeable sources told The Wall Street Journal.