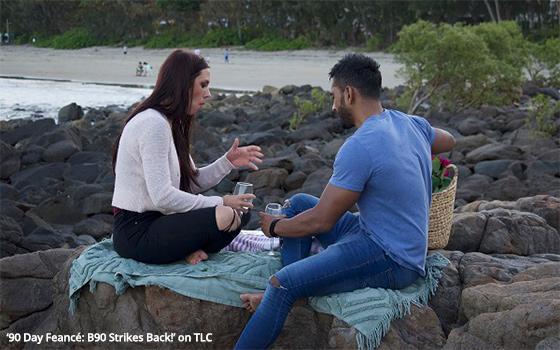 Some might say a TV show has hit critical mass when its title comes to be widely known and understood by a shortened abbreviation or acronym.

“AGT” (“America’s Got Talent”) and “GoT” (“Game of Thrones”) are two recent examples that come to mind, but there have been many more.

Quick -- identify the show or shows that are referred to by the newly coined abbreviation “B90.” No, this is not a vitamin. Nor is it a new U.S. bomber.

“B90” is also being used -- for the first time, at least in the memory of the TV Blog -- in a new subtitle on yet another spin-off. Premiering Monday night (June 22), this one is called “90 Day Fiancé: B90 Strikes Back!”

Confused? You are probably not alone. Originally, “90 Day Fiance” was this reality show on TLC that would reappear from time to time. It dates back to 2014 -- which makes it practically ancient for a TV show today.

Suddenly, however, in the space of seemingly a few months, this show is being talked about in a way that it was never talked about previously. It took six years, but it has apparently caught on.

TLC seemingly airs the various shows more or less constantly. The underlying premise of the whole thing is this: Couples meet online, get engaged for 90 days and then get married -- sometimes almost sight-unseen.

The spin-offs all have something to do with what happened before the 90 days, and after them -- by which time at least some of the couples’ relationships are on the rocks and imploding. There are at least eight spin-offs.

If regular readers of this TV Blog are expecting an opinion here either for or against the TLC galaxy of “90 Day Fiancé” spin-offs, then please prepare yourself for disappointment.

The fact is, the TV Blog is in awe of this “90 Day Fiancé” brand and the lengths TLC has gone to nurture and expand it. If there is a record for the number of spin-offs that can be made from one show, then this must be it.