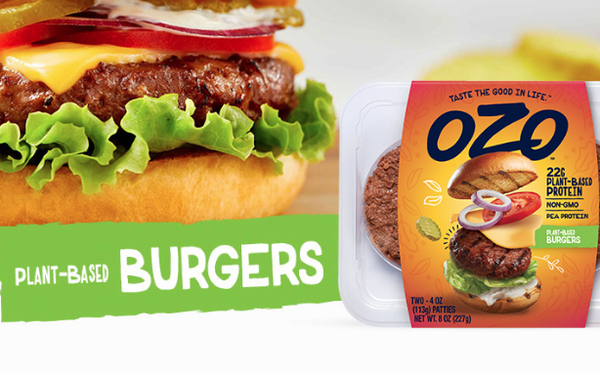 When you decide to take on the giants of plant-based protein foods, you can mimic their save-the-planet marketing approach -- or try something different. Maybe something whimsical?

The OZO brand from startup Planterra Foods is doing the latter, as reflected in the company’s first campaign for its plant-based burger patties, ground and Mexican-seasoned ground products.

OZO’s video running on digital and connected-television platforms declares “Finally, a flex option you’re gonna taco ‘bout,” and “So good your buns will thank you.”

Colorado-based Planterra is a division of JBS USA, a leading processor of beef, pork and prepared foods and a majority shareholder of Pilgrim's Pride Corp. in the United States.

When considering competing with the likes of Beyond Meat and Impossible Foods, Planterra decided those companies “have staked out territories that are what I would classify as very serious. If you’re eating this stuff, you’re saving this planet,” Matthew Rader, vice president of brand commercialization and shopper services at Planterra’s agency, Match Marketing Group, tells Marketing Daily.

The client “wanted to have a brand that didn’t take itself so seriously. That pushes you into the territory of fence-sitters: people that aren’t necessarily buying plant-based today, but are curious about it.”

Planterra had planned to introduce OZO in early March to coincide with Natural Foods Expo West, until the event was canceled because of the onset of COVID-19. It then pivoted to an ecommerce launch, which happened last week on Shopify, in part because many retailers weren’t altering their planograms.

Rader’s brand-side marketing background includes more than a decade of direct-to-consumer experience. Asked why Planterra partnered with Shopify as opposed to creating its own ecommerce platform, he says, “You’re often confronted with the idea of you can either buy capability or build the capability. Quite honestly, buying the capability is far easier and far more efficient.”

OZO is currently distributed in select Kroger stores—mainly in the Midwest and California—as well as the Denver division of Safeway/Albertsons. In addition, it’s carried in Wild Fork Foods outlets in south Florida.

One thing Planterra does have in common with its biggest competitors is the desire to partner with restaurants. “OZO is continuing those negotiations and discussions, and I actually expect we’ll land one of those really soon,” says Rader. “That would certainly be a big benefit to getting the name out there and having people try it.”