Study: Progress For Women, People Of Color In Ads Has Stalled 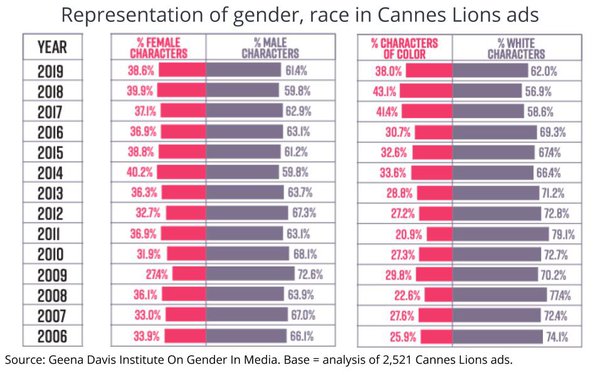 Despite an avalanche of proclamations within Adland over the past few years,  progress for women in ads seems to have stalled, according to research from the Cannes Lions and The Geena Davis Institute on Gender in Media.

There are similar findings related to race/ethnicity. The representation of people of color in 2019 advertisements declined to 38% from 43.1% in 2018. However, on a positive note, research reveals characters of color are equally as likely as white characters to be featured in both speaking roles and visually prominent roles.

“Media is one of the only business sectors where equitable representation can be achieved overnight,” says Madeline di Nonno, CEO, The Geena Davis Institute on Gender in Media. “Brands are creating ads all year long. The very next creative brief can be inclusive! The stalled progress to achieve cultural equity and inclusion indicates that a lot more work needs to be done to reach gender parity in advertising.”

More from the report can be found here.