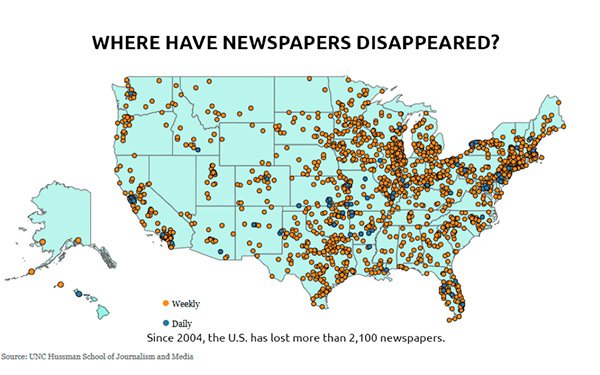 It is the fourth report on the state of local news produced by the Hussman School of Journalism and Media at the University of North Carolina at Chapel Hill.

At least 1,800 communities that had a local news outlet in 2004 were without one (in print or digital) at the beginning of this year, according to the report. That’s up from 1,300 last year.

Some 200 counties in the U.S. do not have a local newspaper. They are deemed “news deserts.” Half of all counties (1,540) only have one newspaper, usually a weekly. Local digital news outlets are not filling the void: only about 500 community or state new sites exist.

“This is a watershed year, and the choices we make in 2020 — as citizens, policymakers and industry leaders — will determine the future of the local news landscape,” reads the report.

The effects of COVID-19 and the resulting recession could lead to the closure of hundreds more newspapers, the report notes.

"The coronavirus pandemic has reminded us, yet again, of the vital importance of local news," the report reads. "Interest in and appreciation for local news has surged in recent months, as residents in cities and rural communities have searched for accurate, reliable and comprehensive information about what is occurring in their own neighborhood."

It continues: "Yet, at this very moment, local news organizations, large and small, for-profit and nonprofit, are confronting a dire economic threat to their existence."

Just last week, The Columbia Journalism Review announced it is partnering with The Tow Center for Digital Journalism to launch the “Journalism Crisis Project.” It serves to document the losses and changes in newsrooms around the world.