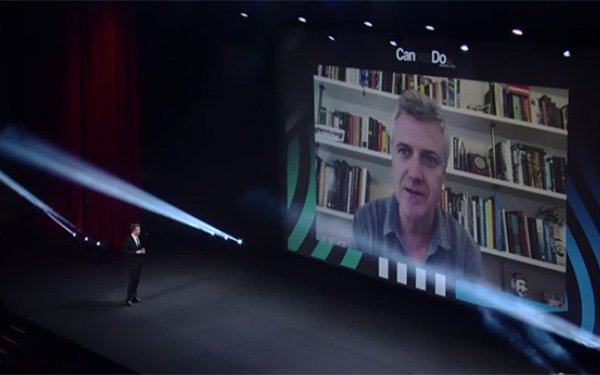 Publicis Groupe revealed winners of its internal Cannes-Do Awards during a ceremony streamed exclusively on the Groupe’s communications platform Marcel on Friday. Broadcast from an empty Palais Des Festivals, CEO Arthur Sadoun presented awards with the help of his partner in crime and not-so-savvy tech support assistant, Chairman Maurice Lévy.

In addition to 10 client campaign winners and five non-profit campaign winners, there were two special award categories. The first, named the “Entente Cordiale (Cordial Agreement) Award”, as it recognizes a great collaboration between France and the UK, was awarded to Moldy Whopper for Burger King, which was created by Ingo Stockholm, WPP’s David Miami and Publicis Romania and Spain.

This collaboration between Publicis and WPP was recognized not only with an award but also with a remote cameo appearance at the awards show by WPP CEO Mark Read via Zoom.

She jokes that there may be a “bromance” brewing between the two holding company leaders.

The second special award, for Client Bravery, went to Diesel to honor the fashion brand’s “bravery” to produce pioneering and progressive work.

These two awards were selected by a jury comprised of top Groupe leaders. The other winners were decided by the more than 15,000 Groupe employees who voted for their favorite work from the 40 campaigns shortlisted by the Cannes-Do jury. This broad range of work serves as an example of how the industry is redefining creativity, says Liz Taylor, Global Chief Creative Officer, Leo Burnett & Chief Creative Officer, Publicis Communications North America.

In addition to creative, winning work came from social media memes, new products, and analytical-driven campaigns. She adds it was fascinating once voting expanded beyond the initial jury to Groupe-wide staff because the contributions of these voices from divisions like Publicis Sapient, Epsilon and Publicis Media helped to bring forth more diverse support.

Serrano notes it is ironic Marcel has come “full circle” at Cannes. The platform’s original announcement came three years ago during the France event and Marcel finally reached a global audience to coincide with selecting winners for this award program. Earlier in the year, the Groupe expressed interest in coordinating Marcel’s full launch with the 2020 Festival, so technically the Groupe accomplished this internal goal. It is just that no one expected it would not be under glitz and glamour, but instead Sadoun standing on stage at an empty Cannes Palais though thousands of Publicis Groupe staffers watched around the world.

1.    Secure Your Account for Emirates NBD by Leo Burnett Dubai
2.    Project #ShowUs for Unilever by Razorfish New York
3.    Social Engineering for Nissan by Epsilon Automotive Chicago
4.    Bittu, The-75-Year-Old-Student for P&G by Leo Burnett India
5.    Act for Food for Carrefour by Marcel Paris
6.    Trapped in the Flavorverse for Pringles by Starcom Chicago
7.    The French Exchange for Renault by Publicis•Poke London
8.    Daniel Craig vs James Bond for Heineken by Publicis Italy
9.    Keep Being You for Gilead by Digitas Health Philadelphia
10. JIF vs GIF for The J.M. Smucker Co by PSOne New York