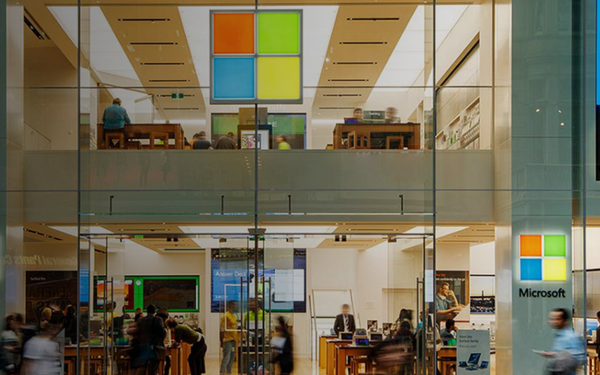 Microsoft will close nearly all its Microsoft Store physical locations, it announced Friday, and instead transfer those stores’ functions to employees working remotely or at corporate offices.

The move affects over 70 stores worldwide that began opening in 2009, seemingly in response to Apple stores that had opened in 2001.

And while stores for both brands are often close to each other at malls, Marc Hachman, a senior editor at PC World, observed, “shoppers visited Apple Stores, and generally ignored Microsoft Stores.”

In part that might be because the Microsoft brand seems more functional than stylish, or as Hachman says, a Microsoft store seems like a coffee shop where people talk tech, while Apple stores feel like a visit to an exclusive restaurant.

The Microsoft stores closed when the pandemic shut down all types of storefront businesses worldwide, including Apple stores.

Microsoft shifted functions to “digital stores” and counterparts run by its Windows and Xbox units, and that will essentially be the mode going forward. A spokeswoman for Microsoft said employees were invited to stay with the company.

Stores will remain open in New York City, London, Sydney, Australia and at Microsoft’s headquarters in Redmond, Washington, but those stores will be rechristened Microsoft Experience Centers.

“Our sales have grown online as our product portfolio has evolved to largely digital offerings, and our talented team has proven success serving customers beyond any physical location,” said David Porter, Microsoft corporate vice president, in a statement Friday morning.

Microsoft said that since the pandemic began and stores closed in March, its retail employees “virtually trained hundreds of thousands of enterprise and education customers” via remote communications and learning software. Microsoft says it hosted more than 14,000 online workshops and summer camps.

The pandemic has changed how some tech companies worked with consumers. When Apple closed its stores, customers with computer problems complained they were left in the lurch. Some, with phones or other tech devices being serviced at the stores, had a two-day window to retrieve their devices after the closings were announced. Those who missed that window had to navigate through the Apple company to find help.