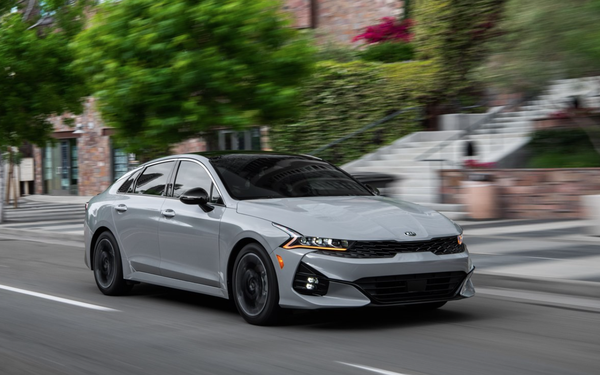 Kia Motors America debuted a midsize sedan with a new name, the K5, while Volkswagen of America unveiled a refresh of its Tiguan compact SUV.

Kia’s “Give It Everything” brand positioning is build on innovation, 'thoughtfulness and tenacity, says Bill Peffer, Kia vice president of sales operations for Kia Motors America during the online reveal for media.

Even though 2020 hasn’t gone the way anyone could have anticipated, Kia is moving ahead with six new or refreshed vehicle introductions by the end of 2020.

Ten years ago, Kia introduced a sporty Optima “that made people stop and stare,” he says. “A few years later, Optima took to the track and started winning races. This sportier attitude has become an integral part of our corporate philosophy and has paved the way for Stinger and our entire GT lineup of vehicles.”

The K5 is such a dramatic leap forward in styling from the current Optima, the automaker decided to give it a new name “that celebrates this bold new chapter in the Kia Motors America story.”

Although some brands are eliminating their car models in order to focus solely on SUVs, Kia believes there is still a buyer for the sedan, as evidenced by the nearly 1.5 million midsize cars sold in the U.S. in 2019.

“From our perspective, the winners in this segment will be the vehicles that stand out, demand attention and evoke emotion,” he says.

Peffer calls the vehicle a “midsize sedan for a more modern driver.”

It is aimed at younger buyers who want something sporty and bold and who don’t want to drive the SUVs of their parents’ generation.

Meanwhile, Volkswagen unveiled a refresh on its popular SUV. In 2019, the Volkswagen Tiguan was the most successful model for both the Volkswagen brand and Volkswagen Group, with more than 910,000 units produced. Over its lifetime, more than six million have been produced.

The refreshed Tiguan includes new interior and exterior styling, with driver-assistance and comfort features. It will arrive in dealerships in fall 2021 as a 2022 model.