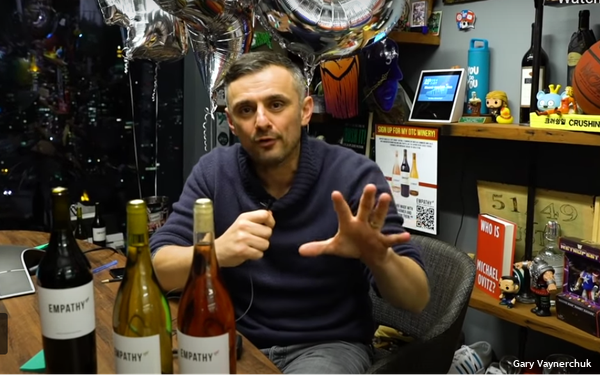 Constellation owns 100 brands including Corona beer and Svedka vodka, and well-known wine labels including Robert Mondavi, Meiomi, Kim Crawford and the Prisoner. And while Empathy is only one year old, it’s gained a solid following -- and, more to the point, has quickly exploited the D2C market that has grown fast, especially during the pandemic.

Its website sells memberships at the silver, gold and platinum level. At the high end, that even entitles members to recommendation from Nora, its online wine concierge. A typical bottle of Empathy wine runs about $20.

Vaynerchuk, who emigrated to the U.S as a child from Belarus, is known for transforming his father’s wine store into the  Wine Library in New Jersey, a superstore that helped launch him as the host of his own YouTube show, and regular appearances on NPR news shows.

He has a well established monthly subscription wine business apart from Empathy, too.

His serial entrepreneurial interests also led to his own lines of clothing, an online reservations system and his own ad agency.

Constellation makes clear it will use Empathy Wines to further scale the company's growth in online sales.

“One of the areas we’re super focused on is becoming the bold and innovative high-end wine and spirits company in the digital commerce channels,” said Robert Hanson, the president of Constellation’s wine and spirits division.

Still, it’s buying a young wine company that has only sold 15,000 cases of wine -- ever. Constellation seems sure D2C is the way to go, even after the COVID-19 uncertainties clear up.

Hanson and Vaynerchuk discussed the acquisition -- in a YouTube video, naturally -- last week. Vaynerchuk called himself an odd combination of “wine boy” and “business boy,” who seemed enamored of becoming part of the same company that now owns Robert Mondavi.

“When you start a business, you don’t think --- I don’t think most people really should think -- about selling that business,”  Vaynerchuk said. But when he saw the opportunity with Constellation, he decided it was a “one-plus-one-equals-eleven opportunity.”

Though not mentioned in the acquisition announcement, Vaynerchuk has another potential connection to Constellation Brands, and possibly a future product for its ecommerce pursuits.  Vaynerchuk acquired a 50% stake in the Los Angeles-based cannabis branding and marketing agency Green Street last year. And Constellation earlier this year increased its stake in the Canadian cannabis company Canopy Growth to about 38%.