'The Doctor Will See You Now' ... At Walgreens 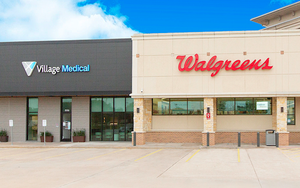 Following a trial with five clinics in the Houston area begun last year, Walgreens Boots Alliance and Village MD say they will offer full-service doctor offices in 500 to 700 stores in more than 30 U.S. markets over the next five years.

“These clinics will accept a wide array of health insurance providers and will ‘offer comprehensive primary care across a broad range of physician services.’ They will offer 24/7 care through telehealth and in-office visits and more than 50% will be located in areas with physician shortages, according to the release,” Keith A. Reynolds writes  for Medical Economics.

“Walgreens and rival CVS Health Corp. are in a race to become go-to treatment centers, particularly for patients with costly, hard-to-manage chronic conditions. Both chains are seeking new ways to counter smaller revenue from prescription drugs, which drive the bulk of their sales. They also are battling online rivals such as Amazon.com that have drawn shoppers away from physical stores,” writes  Sharon Terlep for The Wall Street Journal.

“‘We heard from patients that they trust their local doctor and they don’t like changing their doctor,’ said Alexander Gourlay, Walgreens co-chief operating officer. ‘It became clear that you have to have a primary care doctor as part of the model both physically and digitally,’” Terlep adds.

“Walgreens is expanding its focus on medical care as it cuts costs and invests in new areas. It has closed hundreds of stores and laid off employees, while experimenting with innovative business models. The company wants to turn its drugstores into health and wellness destinations where people spend more time and money,” writes  Melissa Repko for CNBC.

“For example, it leases space in some stores to optical company For Eyes  and weight loss company Jenny Craig. The chain is also testing a small-format pharmacy designed to strengthen relationships between pharmacists and patients, particularly those on multiple medications,” Repko adds.

“Partly in a bid to help address soaring healthcare costs and partly for scale, various elements of the healthcare system have been adopting the buddy system for years. CVS Health completed its acquisition of health insurer Aetna in 2018. In 2014, Walgreens completed its acquisition of Alliance Boots, an international pharmacy-led health and beauty group. The companies argue that making access to healthcare corner-store convenient will lead to better patient outcomes,” observes  Karen Robinson-Jacobs for Forbes.

“This rollout is a major advancement of one of Walgreens Boots Alliance’s four key strategic priorities, Creating Neighborhood Health Destinations,” states Stefano Pessina, executive vice chairman and CEO of  Walgreens Boots Alliance. “These clinics at our conveniently located stores are a significant step forward in creating the pharmacy of the future, meeting many essential health needs all under one roof as well as through other channels.”

“‘What will the pharmacy experience look like in 2025?’ asked Eric Percher, research analyst at health care investment research firm Nephron, in a research note Wednesday. ‘We see bifurcation between the young and well who will increasingly turn to digital experiences and older populations managing chronic conditions who will increasingly engage with community sites of care,’” writes  Alicia Wallace for CNN Business.

“In-store clinics, such as the ones Walgreens plans to build, would appeal to older populations looking for easy access to health care, he said,” she continues.

“They're going to keep building things within that store to make sure you’re coming back to that location,” Morningstar analyst Soo Romanoff tells Wallace.

I don’t suppose replacing parking spaces with bicycle racks and apple trees and putting yoga studios in the area where the Snicker’s Creamy Peanut Butter bars are stocked would be part of the Walgreens Boots Alliance business plan, however.