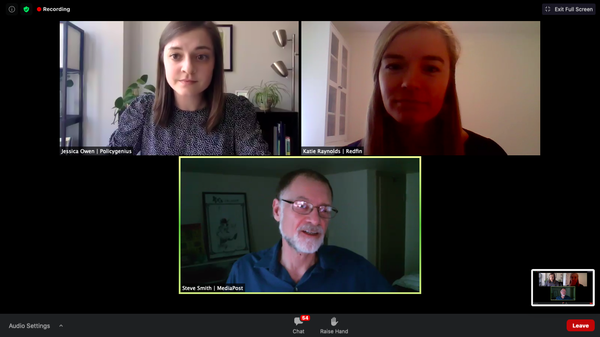 Buying insurance and buying a house are major decisions for most people. They involve research, options and buying cycles with long-term relationships with users. And both require licensed agents.

Some kinds of insurance require medical exams at home or in an office setting. Policygenius, which sells insurance online, saw an opportunity in sending automatic digital reminders, creating a consistent message across email and SMS instead of manually sending them. It reduced an internal team's time spent by 5,000 hours in just a few months.

But, in early March, people did not want a stranger in their home or to go to a medical office. Policygenius adapted the emails to reflect specific updates, letting people know how they could still get coverage during the outbreak, Owen said.

Over at Redfin, meanwhile, Raynolds' team was eager to demonstrate to homeowners all the ways its agents know their local neighborhoods. It started sending small market updates to homeowners, highlighting agents' expertise, and automated the email to the national level. They were dynamically filled in based on each neighborhood. "It looked like these insights came from the actual agents," said Raynolds. "We were so sure we'd struck gold." Open rates were at 50% but they heard from a lot of angry agents.

"We saw that the stats were off," she said. "We were sending nonsensical data, which confused customers. It was the biggest mistake I've ever made." Apologies were sent to agents and customers and her team learned how to amplify the work the agents were already doing well, resulting in a 21% increase in leads and 55% more customers.

Owen and Raynolds offered some takeaways:

Know when to let humans do the driving. Email is important way to get info to customers especially when helping them move from online to offline. Automate key messages.

Create consistency in what users hear online and offline. Have Marketing meet with other departments to make sure the message matches value.

Leverage cross-channel to maximize the effectiveness of email. Pair campaigns with complementary nudges in SMS, push or other channels.