What's In A Name? With This Sitcom Title, Who Knows? 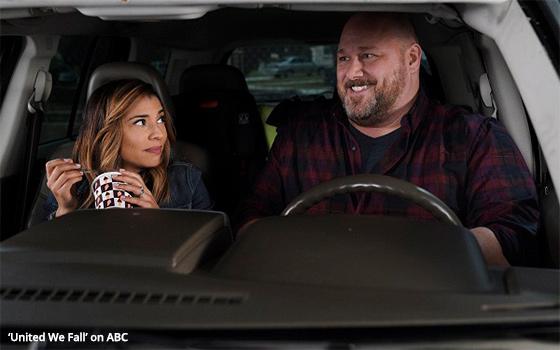 The title of a new ABC sitcom provides a great example of how addle-brained the mind can become when fielding all the messaging that comes at us constantly in our modern world.

The show is called “United We Fall” and it premieres Wednesday night. For several weeks, I have come into vague contact with this title via promotion and marketing efforts that I evidently paid far too little attention to.

Press releases with this title in the subject line would turn up in my email inbox from time to time, and they barely registered.

The press releases were about the upcoming premiere of this show, or they provided a description of some upcoming episode.

I never really knew what they were about because I never read them past the subject line and the first one or two lines that were visible in my email queue.

My only excuse is that I receive a great number of emails like this all day long from television networks, and it is impossible to open and read them all.

From these scanty and absent-minded impressions, I somehow concluded that “United We Fall” was some kind of one-off special that ABC was mounting that had something to do with the troubled times we are all living in.

I even went so far as to speculate (if not conclude definitively) that this show sounded like it would be a concert special of some sort with a gaggle of our most earnest popular-music stars performing from their homes in some TV-inspired effort at cheering us all up.

Never mind that the title of this show was “United We Fall,” not “United We Stand.” I even remember vaguely questioning the wording of this show's title.

Really? I asked myself. Are they really calling this show “United We Fall,” and not “Stand”? I actually thought that in today’s mixed-up, muddled-up, shook-up world, anything is possible -- even a network special purporting to unite us with a title implying the opposite outcome.

Then, just this past Sunday night, I caught a promo spot for this show on ABC and to my amazement, learned that it is nothing more than a new family sitcom.

While I was glad to receive this intelligence, a look at the actual show this week still leaves me scratching my head over the title and its meaning -- or in this case, the lack thereof.

OK, so now I know that “United We Fall” is a new family sitcom on ABC. There is a dad and a mom (Will Sasso and Christina Vidal Mitchell), two small daughters, a live-in mother-in-law (Jane Curtin) and a brother-in-law who shows up, Kramer-like, at the family's front door occasionally.

Based on these formulaic facts, the title of the show would appear to have no meaning whatsoever.

It is almost as if no one involved with this show’s development at either the network or production level could be bothered to think up a real name for it.

No one in the show seems disunited here. The family members in this show all seem to get along reasonably well.

Nor are they seen, at least in the first two episodes that the TV Blog previewed for this column, “falling” in any way, either literally or figuratively. No one loses a limb or a job.

Instead, like so many other sitcoms that the broadcast networks still insist on making, this family “suffers” from a series of trivial First World problems such as what to have for dinner, the traffic they encounter when driving their kids to and from school, and what school to enroll them in.

“United We Fall” feels like the kind of show networks used to burn off in the summer. If that is the case with this show, then the networks' thinking here seems very sound.

Let the record show that the first use of the word “penis” in this network sitcom does not occur until Episode Two.

This is when granny (Curtin) tells her family what she had for dinner. “I had penne for dinner!” she announces suddenly, then adding: “Oh, fun fact! Penne means penis!”

This seemed doubtful to me, and for a moment I even considered looking this up on Google. But I sensibly refrained.