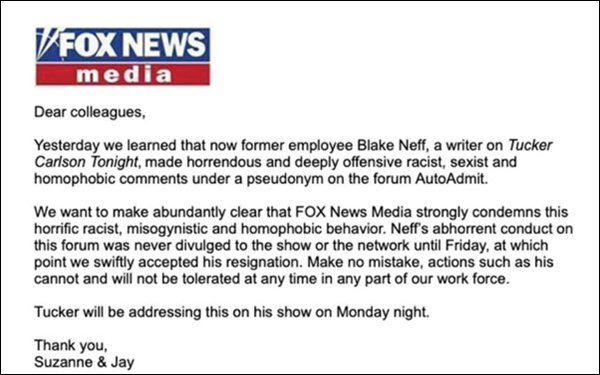 Fox News Media announced that it had accepted the resignation of a writer on “Tucker Carlson Tonight” after learning on Friday, July 10 that Neff had made what the network called “deeply offensive racist, sexist and homophobic comments” under a pseudonym on the forum AutoAdmit.

FNM CEO Suzanne Scott and President Jay Wallace sent a memo to staff on July 11 stating that the “abhorrent conduct” of writer Blake Neff on the forum “was never divulged to the show or to the network until Friday at which point we swiftly accepted his resignation.” Such actions “cannot and will not be tolerated at any time in any part of our work force,” they added.

Neff had been posting the comments under a fictitious name for five years, Fox News host Howard Kurtz said in addressing the situation on Sunday’s “MediaBuzz” show.

“What Neff posted anonymously over five years is very ugly stuff, such as racist jokes including the N-word, derogatory slurs for gays and lesbians, denigrating the Mormon religion and mocking a woman’s dating life,” Kurtz said, according to coverage on FoxNews.com.

Tucker Carlson is “expected to inform viewers” about the incident on his show on Monday night, the report added.