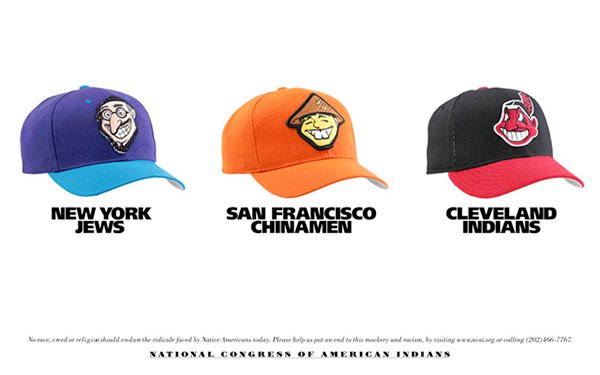 With the news today that the Washington Redskins organization would drop “Redskins” from its name, the folks at ad shop DeVito/Verdi reminded us that the protests against racist team names in pro sports have been going on for decades.

The agency created an ad campaign 20 years ago for the National Congress Of American Indians protesting the racism reflected in the name of Major League Baseball’s Cleveland Indians franchise.

The ad showed three baseball caps. In addition to the Indians cap, with its offensive rendition of “Chief Wahoo,” the ad depicted caps featuring the made-up teams of  the “New York Jews” and the “San Francisco Chinamen,” each with logos as offensive (or more so) as Wahoo.

“No race, creed or religion should endure the ridicule faced by Native Americans today,” the ad stated. “Please help us put an end to this mockery and racism.”

The NCAI has been pushing for a long time for sports teams to stop using racist names. And finally it looks like their efforts and those of others — including Redskins naming-rights partner FedEx — are starting to pay off. FedEx reportedly told the Redskins organization it would pull out of its $200 million-plus sponsorship if the team didn’t take action on its name.

The Cleveland Indians issued a vague rambling statement on Twitter earlier this month mentioning its name, which local reports interpret as a commitment to changing it. My guess is naming-rights partner Progressive probably had a conversation or two with Indians management on the matter.

It’s nice to see some progress on the issue, slow as it is. Of course, the Racist-In-Chief hasn’t helped matters. He denounced the pressure on teams to rename as so much political correctness.

The good news is, companies like FedEx seem to be ignoring him. As they should.