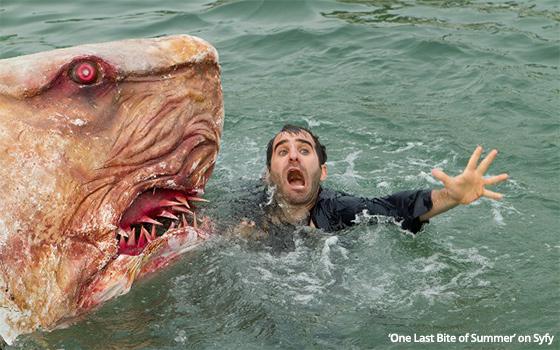 Discovery Channel’s long-running Shark Week has recurred every summer since 1988.

But as the years have gone by, another entrant in the arena of summer shark programming appears to have exerted at least some influence on the other two: Syfy.

Syfy’s ventures into shark-infested waters (and air and land) have been decidedly unserious. There are, of course, the network’s famed franchise of six “Sharknado” movies plus dozens of other shark send-ups that were just as entertaining, if not as well-known.

Next month, Syfy intends to air all of them in a week-long celebration the network has dubbed “One Last Bite of Summer.” This is a substantial increase from last summer’s shark-movie marathon on Syfy that ran for a single weekend.

This year’s “One Last Bite of Summer” is scheduled to begin Saturday, Aug. 22, and run through Friday, Aug. 28.

The movies are all campy, to say the least. And some of that Syfy camp seems to have rubbed off on Discovery and NatGeo.

And here’s the campy part: The event starts with a new show called “Tyson Vs. Jaws: Rumble on the Reef” -- a title that could have come straight out of the Syfy shark playbook.

In the show, boxer Mike Tyson (now 54) will supposedly dive into a reef somewhere and actually take on a shark with his fists.

For added hilarity, the whole thing will be narrated by famed ring announcer Michael Buffer. He is famous for his catchphrase “Let’s get ready to rumble!”

No one who sees the promos or reads any story about this epic face-off between man and shark should believe that this “bout” ever really took place.

Indeed, a news release from Discovery asserts that “no sharks were harmed (or bitten) in the making of this episode.” The use of the word “bitten” is a clever reference to the time Tyson bit off part of Evander Holyfield’s right ear when they fought for the second time in June 1997.

This year’s ’fest includes 17 hours of new content, plus “the best shark programming from the networks’ massive library,” NatGeo says.

The tagline for this year’s Sharkfest would also seem to have been influenced by Syfy: “The Champs Are Back, And They’re Ready to Chomp!”