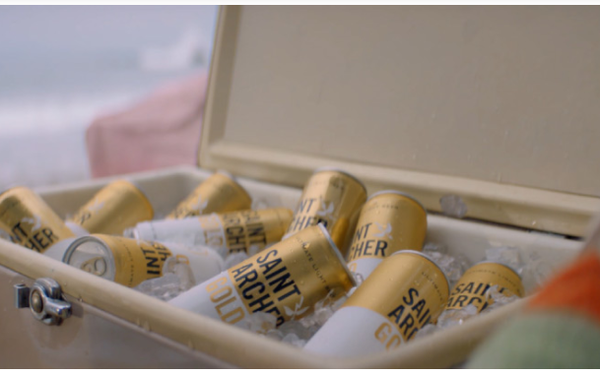 If you’ve never tasted Molson Coors’ new Saint Archer Gold beer by now, you probably never will. The space where it might have been in the grocery beer cooler will probably be given over to a hard seltzer.

The super-premium low-calorie beer, meant to compete with Anheuser-Busch’s top-selling Michelob Ultra, is being discontinued, just six months or so after it launched.

Molson Coors says a big reason for the sudden end -- the company calls it a “hibernation” --  is the pandemic, which disrupted Saint Archer Gold’s marketing plans.

But Miller Coors also has decided to put its new branding eggs into a different basket, most emphatically the hard seltzer business.

It announced it is expanding its Fort Worth plant by 400%, mostly to accommodate its new Vizzy and the forthcoming Coors Seltzer lines. The expanded facility should be up and running by this fall.

Forget “plastic.”If Mr. Robinson had just one word of advice to “The Graduate” today, it could be “seltzer.” This beverage is totally overwhelming beer companies, so much so that at the beginning of 2020, Molson Coors Brewing Co. changed its name to Molson Coors Beverage Co.

Molson Coors uses contract suppliers to make Vizzy, just as other beverage companies job out some manufacturing. But as the category has grown, it now needs the Fort Worth facility to increase production, and is putting more money into a Colorado facility to increase production of the slim aluminum cans consumers now seem to favor for seltzer products.

Molson Coors reports that eight of the top 10 Nielsen Growth Brands in the most-recent period are hard seltzers, “underscoring a seismic shift in the beverage alcohol industry.”

It also claims that its variety 12-pack of Vizzy, which only launched in April, ranks as the third best-selling new item in the entire beer and malt category -- behind only 12-packs from the hugely-dominant White Claw, and the brand new Corona Hard Seltzer.

Michelle St. Jacques, CMO, explained in a letter to distributors that  “while early results of the launch were positive, the effects of the coronavirus on our industry caused an immediate loss of momentum for the brand, due in large part to not being able to execute critical brand activations and trial-driving programs that were at the heart of our launch plan.”

Saint Archer, based in San Diego, was the first craft brewery Molson Coors acquired, in 2013, and continues as before, absent the Gold low-carb brand.

It’s newsworthy, though, that Molson Coors also announced it is increasing marketing for Blue Moon LightSky. The beer, a tangerine wheat ale from the Molson Coors-owned craft brewer Blue Moon, is the top new craft beer introduced in 2020, according to Nielsen. Like many of the new offerings from Molson Coors, Anheuser Busch and other brewers, LightSky is a low-calorie, low-carb, lower-alcohol-content product.

However, it’s not a seltzer.