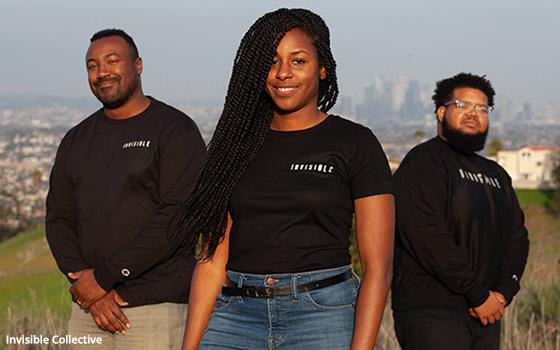 Three industry veterans are joining forces to launch Invisible Collective, equal parts production company and creative studio to provide greater access to diverse directors and creatives. Their roster of talent will specifically represent women, people of color, and members of the LGBTQIA+ community.

This “melting pot” of talent will be led by founders Justin Polk, director, Mel Jones, director and Stephen “Dr” Love, producer/entrepreneur. Collectively, they have worked with brands including Verizon, Hyundai, Netflix, and Paramount Pictures.

Although Jones and Polk have been longtime friends for years, the idea for this shop was sparked in 2018 after meeting Love. The leaders realized they had three advantages in building a new company from the ground up. First, the lack of diversity within the advertising industry would and could not be transformed from inside an already established culture.

“Creative is king in this industry and change would only happen on the outside,” says Polk.

They also recognized there wasn't a production company that seemed to have more than one woman or one black or brown person on the roster. “This isn’t good enough,” says Polk. "We needed better representation."

Lastly, there is a missing playbook that helps guide the path of many within this industry. It is not taught in schools. In fact, both Jones and Love noticed a lot of first-time minority filmmakers have a hard time supporting themselves between films. “A lot of these filmmakers didn't know that the commercial space was a way to earn a living while also working on your craft,” explains Polk. “So we wanted to open that opportunity to them."

The shop’s physical location will be based in West Los Angeles, but all three will continue to work remotely given the pandemic.