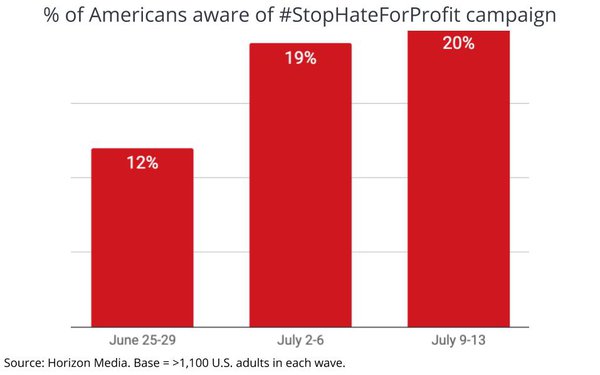 Nearly a month into a grassroots campaign encouraging brand marketers to boycott social media platforms -- especially Facebook -- that enable hate and disinformation to spread, awareness and support among American consumers has grown considerably. That's the finding of a series of consumer tracking studies fielded by Horizon Media since the #StopHateForProfit campaign began in late June.

Unaided awareness of the campaign among American adults has grown from just 12% in Horizon's first survey, fielded June 25-29, to 20% in its third survey, conducted July 9-13.

While overall awareness remains relatively low, support has grown considerably among consumers who had the campaign described to them.

The percentage of Americans who say they pointedly support brands participating in the #StopHateForProfit boycott grew from 18% to 40% over the three waves of studies, while the percentage saying they would pointedly boycott such brands fell from 6% to 4% over the same period.

"The upside potential for brands of participating in #StopHateForProfit continues to be significant with much more consumer support for the campaign than opposition," a Horizon report assessing the data concludes, adding, "The downside risk of participating remains minimal."

To date, more than 400 major consumer brands have announced they are participating in the effort, explicitly pausing their advertising on Facebook and its Instagram platform.

While the top line findings indicate a net benefit for brands participating in the effort, Horizon points out that each brand should "consider how that brand's DNA aligns with social justice movements" before pulling the trigger.

For example, while a small but vocal minority explicitly opposed the campaign, they tend to be older and politically conservative, and Republican-leaning Americans, if politics and age are a factor for respective brands.

“Even if consumer goodwill does not accrue to business results down the line, the campaign could represent an opportunity for brands to take a public stance on a social and cultural issue with wide support -- if the brand is comfortable doing so and it fits with their mission and values,” states Kirk Olson, senior vice president of Horizon’s Why Group, which is managing the research, adding, “This is an especially important consideration for socially progressive brands, brands with younger skewing audiences, or brands that expect to be called upon to make public statements regarding the issues behind the campaign.” 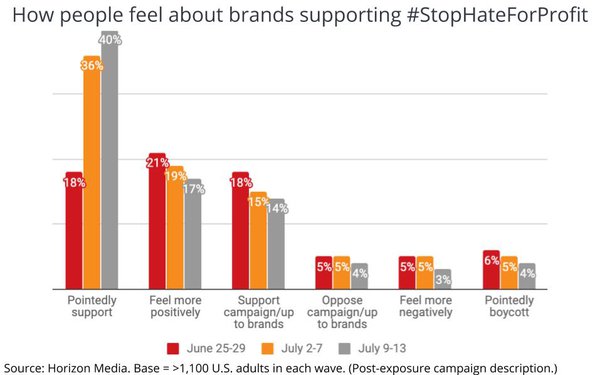