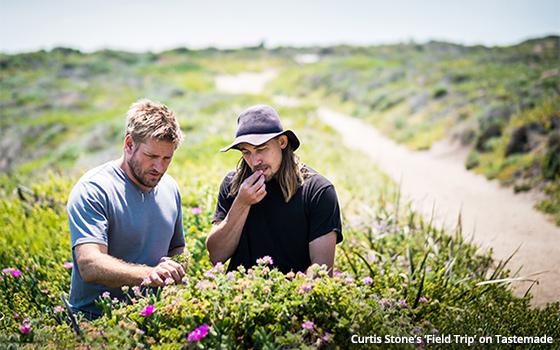 Season one, called “Field Trip,” will have six episodes. It debuts July 20.

Tastemade says its 24/7 streaming network will bring the show to more than 80 million households throughout the U.S.

“Field Trip” will follow Stone — a Los Angeles-based chef and restaurateur — and his team from the Michelin-starred restaurant Maude as they travel the world looking for inspiration for its regional tasting menus.

Each 30-minute episode features a trip to one specific region, highlighting the artisans, farmers, wine producers and topography of the area. Each episode will also offer a behind-the-scenes look at how Stone incorporates his research and experiences into Maude's menu and wine pairings.

Shot by Curtis' friend and cinematographer Dave Gorn, the first series takes Curtis and his team to his native Australia, as well as Italy, Spain and California.

Stone has been featured on other Tastemade series over the years, including “Like a Chef,” “Kitchen Little,” “Dish” and “The Shift.”

"Having been longtime fans and collaborators of Curtis Stone, we are excited to share his beautiful series on global inspiration,” stated Darin Bresnitz, director of original series at Tastemade.

"Field Trip" can be streamed on Tastemade’s Streaming Network, with a subscription on YouTubeTV, AT&T, Philo, TVision, Comcast, Sling TV and Fubo TV.

It is also available for free on Samsung TV Plus, Vizio, IMDbTV, Xumo, TiVo, The Roku Channel and Peacock.

The show can be watched on demand on Tastemade+ via AppleTV, Amazon Channels and Sling TV.

Tastemade signed a deal with VIZIO SmartCast TVs and Sling TV in April, bringing its content to potentially 14 million more viewers for free.