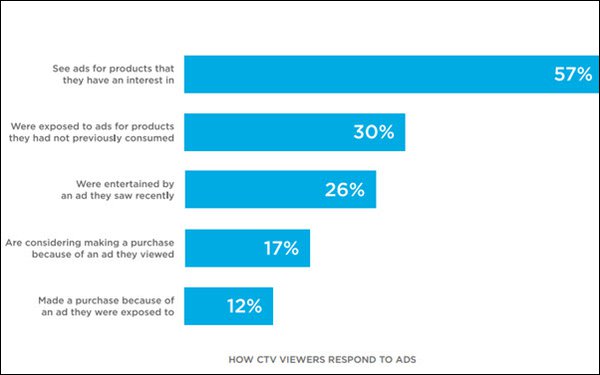 Connected TV consumers are widely on-board with accepting advertising if it means getting free content, confirms a new survey conducted for SpotX.

Mintel surveyed a nationally representative sample of 1,500 CTV consumers 18 and older who said they watch CTV at least once per month.

While the research was fielded in February, prior to the pandemic-driven surge in streaming, it provides pre-COVID consumption benchmarks, and perhaps more important, behavioral and demographic insights about CTV consumers that aren’t likely to have lost their relevance over the past few months.

Here's a look at some of those insights and pre-pandemic consumption benchmarks, including some comments from an interview with SpotX COO Sean Buckley.

At the same time, four out of five, or 80%, reported watching at least some ad-supported CTV programming.

While 42% of CTV viewers said they dislike seeing ads, 58% reported generally positive attitudes about ads based on ads making it possible for them to watch free content, being entertained by ads, and ads providing information about brands they’re interested in and informing their purchase decisions.

“As technology has improved, video advertising is becoming more personalized and relevant for viewers,” says Buckley. “The combination of the growth in time spent watching streamed programming [see below] and four out of five viewers saying they watch ad-supported content is the strongest indicator that the audience is actively embracing ad-supported programming.”

In terms of negative responses to ads, 36% said their biggest issue is being shown the same ad too many times, and 28% said they find it creepy when ads “follow” them from one screen to another, including on CTV. Importantly, nearly three quarters (71%) said they’re concerned about how their personal information is being used for advertising purposes.

“Generally speaking, the results indicate that there is an acceptance toward ads being shown, especially in order to provide free-to-view content, and that consumers find value in entertaining and personally relevant ads,” sums up the report. “However, media companies and advertisers should be mindful of over-exposure and respect consumer privacy protections.”

Even before shelter-at-home, this research found 63% of respondents reporting that they watch CTV every day, for three hours on average, and 94% watching at least weekly. Viewing hours per week averaged 23.

SpotX doesn’t have any of its own previous comparative data — this is the company’s first consumer study on CTV — but Buckley notes that Nielsen found the average time per day to be just 46 minutes as of 2018.

In comparison, Nielsen reports that traditional broadcast TV viewers watch an average of 35.5 hours per week, but "most of the incremental hours are largely driven by the 55+ age group, given that the median age of live linear broadcast TV viewers is 58.7 years,” points out the report.

Device-wise, 54% access CTV through smart TVs, 37% through streaming devices, and the rest through gaming consoles.

Thresholds for Costs, Number of Subcriptions

Most said that four was the maximum number of services to which they would subscribe, and 80% didn’t intend to increase their spending on subscriptions in the next 12 months.

Still, most respondents cited flexibility and variety as the primary reasons they watch CTV, with affordability taking third place.

Bottom line: CTV viewers said they were are looking for ways to increase access to content without increasing cost.

“America’s appetite for streamed video is strong. However, consumers’ willingness to pay for content is limited to a select few subscription services,” sums up the report. “Ad-supported content provides streamers with a wider choice of options, and CTV viewers are enthusiastically embracing it.”

Contrary to what some might assume, the CTV audience is not skewed to younger segments. Among U.S. CTV consumers, the median age is 45, and the audience is fairly evenly distributed across age segments: 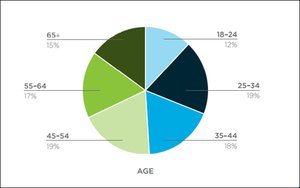 Caucasians dominate the audience, but 30% of viewers are of other ethnicities, with 36% of that 30% made up of Hispanics, 10% of African-Americans, 3% of Asians and 2% other.

"Advertisers should follow the audience,” argues the report. “Traditional TV remains the number one choice for achieving scale, but… it is a graying audience and gradually becoming less reflective of America’s dynamic society. CTV mirrors our national consumer makeup – diverse, digital, and demanding. It has become the ideal way to reach specific audiences effectively at scale.”