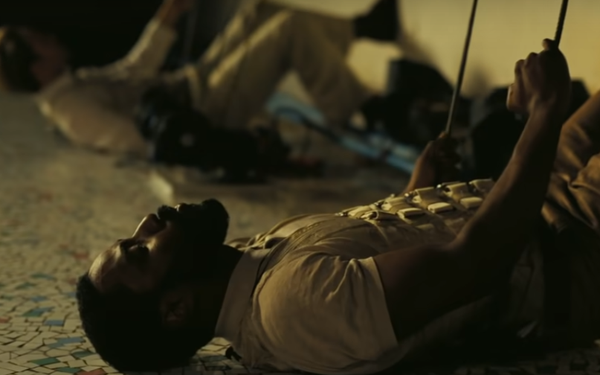 "Tenet," Christopher Nolan’s long-awaited sci-fi action thriller -- and tentpole-wannabe -- will be awaited even longer still. Warner Bros. announced yesterday that it was pushing back its theatrical opening in the U.S. for the fourth time as COVID-19 refuses to “just disappear.”

“It’s unclear when it will now welcome audiences, but the studio expects to announce a new release date ‘imminently,’” writes  Variety’s Rebecca Rubin, who broke the story.

“The move marks a hoisting of a white flag for a studio that had hoped to charge ahead after many others had long since surrendered. Disney, the only other major studio with a movie scheduled in the next six weeks, will probably also postpone its two August films, ‘The New Mutants’ and ‘Mulan,’” writes  Steven Zeitchik for The Washington Post.

“With coronavirus cases surging in California and other large states, no major new films are likely to be released in the United States until at least September. That will deprive consumers of entertainment and, critically for the entertainment business, theaters of badly needed revenue,” he adds.

“In what would be a surprise move, Warner Bros. may release ‘Tenet’ overseas before it opens in the United States. Though North America remains the biggest moviegoing market in the world, international cinemas look to be ahead of the States in their efforts to reopen. Sources at the studio stress they will have to be flexible with plans to unveil ‘Tenet,’ suggesting the film won’t have a traditional rollout,” Variety’s Rubin writes.

“Like most Nolan films (‘Dunkirk,’ “The Dark Knight’ trilogy), the director has built hype by releasing as few details as possible. We'll have to carry on being patient to see what looks like another tricky sci-fi thriller, starring John David Washington and Robert Pattinson,” write  CNET’s Jennifer Bisset and Shelby Brown.

That’s not to say there aren’t big bucks in play.

“The production budget for ‘Tenet' is reported to be $200 million or more. Normal marketing for a release like this could easily reach $150 million. While there are multiple revenue platforms after a theatrical release, the studio is counting at least on $400 million-$500 million in ticket sales (traditionally, a little less than half goes to exhibitors),” Tom Brueggemann points out  for IndieWire.

“Much has been spent on advertising that included the August 12 date, but this new and evolving paradigm might be less expensive. Junkets and travel are eliminated; there’s less competition; and there’s already a very high level of awareness,” Brueggemann adds later in the story.

“Warner Bros.’ ongoing struggle to find a workable release date highlights the challenges many businesses face -- especially those predicated on public gatherings -- amid shifting public-health mandates and guidelines that differ from jurisdiction to jurisdiction…,” R.T. Watson observes  for The Wall Street Journal.

“The large majority of U.S. movie theaters have been closed since March, including multiplexes in major markets like California, New York and Texas. Opening a new movie domestically has remained a risky proposition. Meanwhile, theaters have begun reopening in some countries that have had better success than the U.S. in containing COVID-19,” Watson continues.

“Movie theaters remain in a precarious limbo. Without new releases, U.S. indoor theaters and drive-ins that are open have played mostly older films and a smattering of smaller new releases. Before the recent spike in the coronavirus crisis, theater chains have sought to assure moviegoers with protocols like limiting theaters to between 25% and 50% capacity and cleaning seats in between showings,” Mariah Haas writes for Fox News.

“But months of closed theaters and no new product has put enormous pressure on an already stressed business. AMC Theaters, the world's largest chain, recently reached a debt deal to remain solvent. AMC has been aiming to reopen most locations July 30. Cineworld, which owns Regal Cinemas, had set July 31 for its reopening,” Haas adds.

Twitter was alive with reactions to the “Tenet” news, as documented by Adam Holmes on CinemaBlend.

“Since Tenet is already a movie about inverted time, they should release an alternate cut of the movie on streaming first, then the original cut of the movie in theaters a year later. #ReleaseTheMultipleNolanCuts,” @JosephScrimshaw posts.

“My theory: TENET isn't real, it's just a trailer and it's resistance to inevitable delays are the conflict. It's a meta-movie-marketing-mindfuck and the most Nolan thing ever,” posits @hperryhorton.