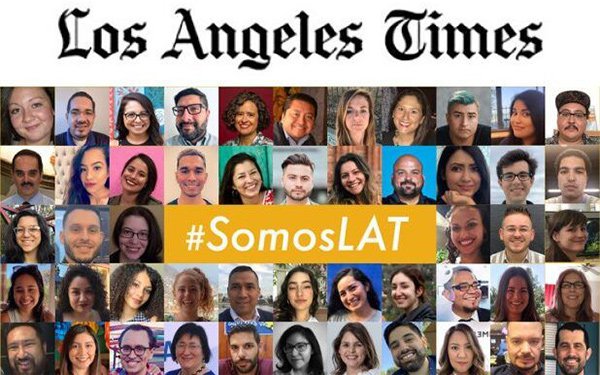 The Los Angeles TimesGuild’s Latino employees have established a Latino Caucus to advocate for better representation at the newspaper company and demand more coverage of the Latino community.

The letter,  addressed to owner Dr. Patrick Soon-Shiong, executive editor Norman Pearlstine and managing editors Kimi Yoshino and Scott Kraft, accused the Los Angeles Times of covering “the Latino community in dehumanizing ways, painting us as criminals or victims or simply ignoring us” throughout much of the newspaper’s history.

“Today The Times continues to fail, in its staffing and coverage, to reflect a region where nearly one of every two residents is Latino. In doing so, it has neglected to serve what should be its largest audience.”

According to the letter, just 13% of the Los Angeles Times newsroom is Latino. Of 109 editors and managers, only 11% are Latino.

The letter contains a list of 14 demands, such as asking for more coverage of Latinos, hiring more Latinos on the business side, correcting pay disparities, providing L.A. Times en Español with more resources and investing in events catered to Latino audiences.

The letter also demands the hiring of more Latino editors, managers and journalists to match the county’s demographics within five years, specifically for beats that have no or few Latino representation, such as Campaign 2020, Crime, Investigations, Latin America, National Desk, Washington D.C. and Food.

The Latino Caucus was inspired by the formation of the L.A. Times Guild’s Black Caucus, which sent a letter to the newspaper’s leadership last month outlining the lack of Black journalists in the newsroom and demanding change.

It was signed by 15 Black Caucus members and 183 other Guild members “in solidarity.”

“The nation’s reckoning over race has put a much-needed spotlight on inequities at The Times. We are in a crisis and it is not new,” the letter reads.

It continues: “We don’t have enough Black journalists — or, more broadly, journalists of color — to cover our overwhelmingly diverse city, state and nation with appropriate insight and sensitivity. And most of us who do work here are often ignored, marginalized, under-valued and left to drift along career paths that leave little opportunity for advancement.”