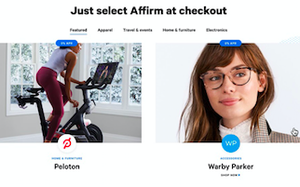 With finances weighing heavily on the minds of so many consumers, Affirm is launching a new campaign that encourages them to be grateful. The financial services company, which offers installment loans for some 6,000 merchants, says the count-your-blessings approach is intended to tap into the optimism people may be feeling as they emerge from months of fearful self-isolation.

"The biggest thing as we started to venture out of our homes was this appreciation for everything around us that was taken away for a while," says Greg Fisher, chief marketing officer. "And as we slowly started to reintegrate into our communities, it's those little things that make life special: going out to eat again, having friends over for a socially distanced barbecue. People are looking to get reacclimatized to their lives."

Affirm is supporting the all-digital campaign through special promotions with partners, including Dyson, West Elm, Adidas, Best Buy and The Home Depot.
Fisher says the San Francisco-based company is looking at this campaign in phases, focusing first on purchases for the home, and then for being outdoors.

He says the pandemic-driven surge in online shopping has sparked "a monumental shift in people thinking about paying over time."

He tells Marketing Daily that Affirm's main selling point with consumers is that it is a straightforward alternative to credit cards. "The big differentiator is that we have no late fees and no hidden fees, and we are adamant about that. That's what brings customers back and why we have a repeat rate of more than 70%."

And many of the merchants Affirm works with are shifting money away from brand campaigns to generate a higher return. "With this campaign, they've got a high intent consumer coming to them with a desire to purchase with something that's meaningful. We wanted to use this insight to bring both of them together, to provide a benefit for both sides."

He says Affirm is benefiting from a shift in merchant marketing plans. "A few years ago, merchants didn't see payments as a strategic part of their business. But they're willing to look at us as a revenue accelerator."

Pandemic uncertainty has merchants prioritizing both internal marketing efforts and their budgets. "They're asking us how do we bring them new consumers, lift their average order and increase conversions, ” says Fisher.

He says that the more concern people have about their finances, the better an alternative Affirm becomes -- especially as the recent spike in new cases and potential restrictions have people more worried about money. "Consumers are looking at cards and for the first time saying, 'What interest am I actually paying?’"

Fisher says more than half of consumers don't know their current interest rate, or what happens if they miss a payment. "They like our predictability and stability, with a set payment each month and the ability to be a little late. We want to be a responsible alternative." Currently, 5.5 million consumers use Affirm.

The campaign includes social media, influencers and content. It's partnering with Apartment Therapy to build awareness in the home arena, and with Who What Wear to create awareness in fashion and beauty.