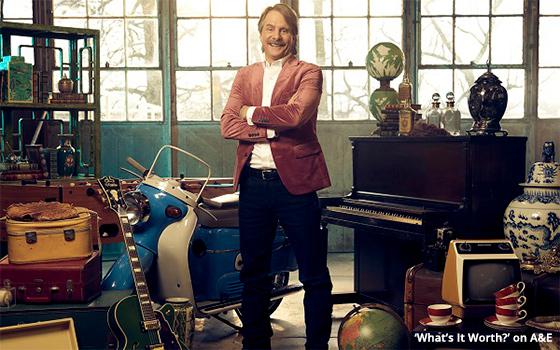 A new show about collectibles is coming to A&E next week at a time when values for all sorts of “treasures in the attic” seem to be tumbling on another TV collectibles show, “Antiques Roadshow.”

A&E’s new show is called “What’s It Worth?” -- which is the question on everybody's mind when watching or participating in these TV shows centered on the oddities some people collect or find in their attics, closets and basements.

On “What’s It Worth?,” host Jeff Foxworthy (pictured above) makes virtual visits from his home in Georgia to ordinary people's homes around the country, discusses their collectibles with them, and then brings in, virtually, an appraiser/expert to evaluate their items.

The show is virtual because it has been produced in the months since the COVID-19 lockdown. Next week's premiere is a precursor to a live version of the show (“What's It Worth? Live”) coming this fall.

Among the items getting appraised in the premiere: A larger-than-life wooden statue of the angel Gabriel in a young family's living room, a human skeleton on display in another home and rare security jackets worn by security personnel at the 1969 Woodstock music festival.

But this show is coming along at the same time that another phenomenon is emerging on “Antiques Roadshow”: Falling values for a number of collectibles seen on the show.

A staple of the PBS content lineup, “Antiques Roadshow” happens to be the longest-running of TV's collectibles shows, and the one credited with leading to the creation of so many others.

“What's It Worth?” is the first new one of these to appear in quite some time. In fact, the genre seemed to reach a peak as far back as 2011.

At one time back then, there were nine such shows, including some that are still around (“American Pickers” and “Pawn Stars” on the History Channel). There was even a summer collectibles show on NBC called “It’s Worth What?”

Back then, it soon became evident that TV could not sustain so many similar shows in the same space, and most of them petered out.

“Antiques Roadshow” is one of the survivors, due at least in part to the way in which PBS has made spinoff shows over the years in which portions of various shows are cobbled together according to themes, or the host cities in which they were filmed.

In one type of this re-cutting and repurposing, older shows from as many as 20 or more years ago are revisited. In their appraisal segments, the values of the items from 20 years ago are shown followed by the value of the same item today on the auction or antique-shop market.

In many cases, for a wide range of items, the values have plummeted -- so much so that it is possible to wonder if the bottom has fallen out of the collectibles market generally.

This conclusion based on 20-year-old segments on “Antiques Roadshow” is by no means scientific.

And it is true that many types of items on the show have grown in value due to a number of factors. Or at the very least, many items have remained more or less the same.

Still, observing the many declining values while watching “Antiques Roadshow” earlier this week came as a surprise.

Perhaps like so many other things in our rapidly changing world, interest or fascination with certain kinds of objects from yesteryear is not as keen as it once was. Today, with so many people embracing the new, who has time to dwell in the past?