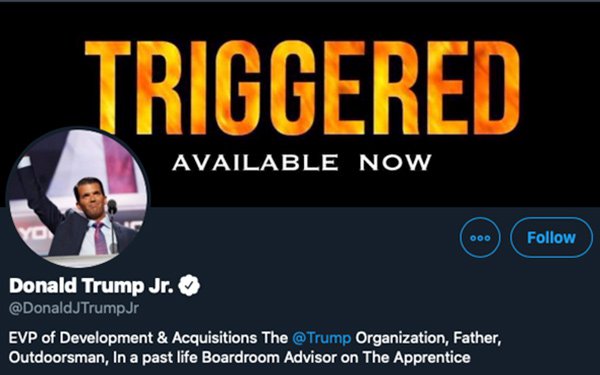 On Monday, President Trump’s son shared a video featuring people in white lab coats asserting that masks were unnecessary to prevent the spread of COVID-19, and that hydroxychloroquine could “cure” the virus.

This violated Twitter’s policy on “spreading misleading and potentially harmful information related to COVID-19,” the company explained on Tuesday.

Short of a “suspension,” Trump Jr will be prohibited from posting new messages, and liking or retweeting other posts for 12 hours. According to Twitter, he should still be able to use the app’s Direct Message feature.

Yet, tampering with Trump Jr’s account threatens to escalate tensions between Twitter and powerful Republicans, including the President himself.

Although Republicans have long taken issue with what they consider Twitter’s liberally biased content policies, they recently became more hostile toward the company after it began labeling some false statements tweeted by the President as “potentially misleading.”

Further ruffling the feathers of conservatives, Twitter just recently vowed to reduce the reach of QAnon -- a community of far-right conspiracy theorists known for its obsession with the “deep state,” and their belief that Barack Obama, Hillary Clinton and George Soros were once involved in child sex trafficking.

Trying to rein in Twitter’s power, Republicans have requested that CEO Jack Dorsey participate in the upcoming Congressional antitrust hearing.

“We believe there is bipartisan interest to hear from Twitter about its power in the marketplace, its role in moderating content on its platform, and the causes for its recent highly publicized security breaches,” Jim Jordan (R-Ohio) wrote in a recent letter to Judiciary Chairman Jerrold Nadler (D-N.Y).

In the letter, Jordan also noted Republicans wrote to Dorsey earlier this month to request information about Twitter’s content policies, but have yet to receive a response.