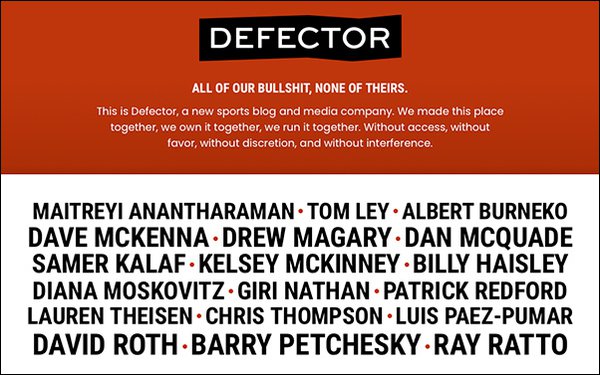 Defector Media, a new subscription-based sports blog and media company, is set to launch. It's created by staffers who quit Deadspinin protest in 2019. The new venture will be led by EIC Tom Ley.

A podcast is slated to launch in August, with the new sports blog appearing in September.

Jasper Wang, who previously worked at Bain & Company, will lead the business side of Defector Media.

Writers and editors are free to cover topics other than sports, a key issue that led to the firing of top editor Petchesky and a mass exodus of Deadspin’s staff at G/O Media last year.

Subscriptions run $8 a month with a discounted annual rate.

Defector is employee-owned and has no outside investors. According to a report by The New York Times, 18 of the approximately 20 staffers who quit Deadspin will run the company and have each taken a roughly 5% stake. Defector Media has a total of 19 staffers who will be paid as the company makes money.

Deadspin was acquired by G/O Media in April 2019. A few months later, Deadspin EIC Megan Greenwell left the company, citing clashes with leadership. The firing of Petchesky and departure of staffers soon followed.

Earlier this year, after moving operations to Chicago, Deadspin was relaunched with Jim Rich taking on the position of EIC. Rich is currently editorial director of G/O Media.