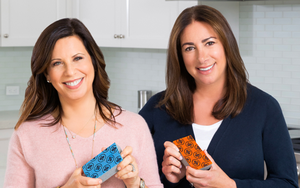 Alison Matz and Linda Sawyer left successful careers in media and advertising to create “a wellness revolution in the kitchen” under the Skura Style brand in late 2017.

Matz held magazine publisher roles at Conde Nast and Meredith, while Sawyer had been North America CEO and Chairman of the Deutsch agency.

The duo’s first product is an antimicrobial kitchen sponge, whose attributes are detailed in this video. Sawyer’s inspiration to take on “big sponge”—aka 3M—arose from a personal pain point.

A self-proclaimed “clean freak,” she was motivated by the fact that while the appearance and functionality of many kitchen accessories had improved over time, the kitchen sponge remained “ugly, disgusting” and, yes, odorous.

In this interview, Sawyer talks about consumer perceptions of sponges, Skura Style’s fading monogram—which indicates it’s time to replace the sponge—and the CPG startup’s use of radio to convey its “sick of ick” story.

CPG FYI: How did you go about reinventing the kitchen sponge?

Sawyer: We went on a mission to create a sponge you could actually love—one that is beautiful and offers superior efficacy on every measure. We did product research and identified new materials so that our sponge is highly absorbent, maintains its shape, dries fast, rinses clean and is treated with an antimicrobial agent so that it doesn’t smell.

CPG FYI: What did you learn about people and their relationships with sponges?

Sawyer: We did consumer research and validated that this was a shared pain point and that there is a universal hate affair with sponges available in the market. We also learned that complacency exists when it comes to sponge replacement. Consumers readily acknowledge this, but do so with apology and embarrassment.

Sawyer: With our fade-to-change technology, the monogram gradually fades with use within 1-2 weeks, to let you know when it’s time to replace. This was by design, based on leading microbiologists’ recommendation that you replace your sponge every 1-2 weeks.

CPG FYI: Talk about the timing of your launch vis a vis the onset of COVID-19.

Sawyer: The science behind what’s so disgusting about the traditional, average kitchen sponge versus the benefits of ours resonates even more now than ever. People are cooking and cleaning like crazy. Also, what used to be thought of in some cases as neurotic behavior or being a germophobe or a clean freak has become more of the norm—and people have a heightened sensitivity to anything related to bacteria and germs.

CPG FYI: You’re going up against a giant in the form of 3M, which doesn’t seem to do a lot of advertising.

Sawyer: Our consumer research revealed that the majority of people could not recall the brand name of the sponge that they were buying or how much they were paying. This was surprising to us because [3M’s] Scotch Brite is the leading brand in the U.S. market.

CPG FYI: What are your distribution channels?

Sawyer: We sell on our website, Amazon and Food52. We’ve also been in discussions with several very large retailers. [Retail distribution] probably would have happened late summer, beginning of fall before COVID hit.

CPG FYI: Your media mix includes SiriusXM radio, primarily on stations like CNN and MSNBC. How is that going?

Sawyer: Radio is a great story-telling platform. Alison and I are the talent.There are many layers to our story from two women who were sick of ick, the gross factoids about traditional kitchen sponges, and Skura Style as the solution.

We feel that radio offers intimacy by our ability to deliver the Skura Style story in our own voice. There is also a sense of immediacy and it allows us to give a call-to-action.

Sirius delivers a particularly engaged audience given their paid-subscription model. And, since one of our buying options is subscriptions, there is a shared mentality and buy-in to this kind of model.

CPG FYI: What are your near-term, new product plans?

Sawyer: We are launching three new SKUs in the coming weeks, all under the Skura Style brand: Very Skrubby, which is a heavy-duty scouring pad; Wipe Envy, ultra light microfiber cloths that are positioned as an alternative to paper towels; and Towel Ta-Da! dish towels.