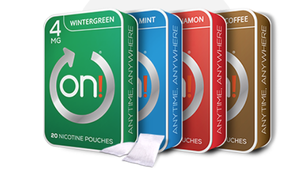 With folks at home, not spending discretionary income on gas, transit, and entertainment, there's more money for items like tobacco products.

This is good news for Altria Group and its ongoing juggling act: maximizing the profitability of cigarettes for its subsidiaries like Philip Morris USA to fund the rollout of such non-combustible alternatives as the IQOS tobacco-heating system and on! nicotine pouches.

“Adult tobacco consumers continue to make fewer trips to the store but increased their tobacco expenditures by buying more packs and cans per trip,” Altria CEO Billy Gifford said Tuesday in a reference to cigarettes and oral tobacco products.

In 2019, Altria partnered with Helix Innovations to sell the on! brand of nicotine pouches—which are marketed as a means of ingesting nicotine “without the chewing, spitting, smoking or odor” of traditional oral tobacco products.

According to Gifford, on! was available in more than 40,000 stores as of June 30—an increase of nearly 43% since the first quarter.

Housed in rectangular packages instead of the typical round cans in which moist, smokeless tobacco products are typically found, on! is particularly attractive to females “due to its spitless, white and compact format,” Gifford said.

On July 7, the U.S. Food and Drug Administration authorized the marketing of the IQOS electrically heated tobacco system by Altria’s Philip Morris USA subsidiary as a “modified risk tobacco product.”

IQOS heats sticks of tobacco without burning them, making it “a fundamentally different tobacco product and a better choice for adults who would otherwise continue smoking,” the FDA said in a statement. “This significantly reduces the production of harmful and potentially harmful chemicals.”

“As far as whether it's Democratic or Republican, I think if you look back in our history, we've shown we know how to successfully navigate both of those administrations,” Gifford responded.

“We have a strong government affairs team, we support both sides of the aisle, and so we feel like we have the right tools in place and the right employee base to navigate that successfully.”