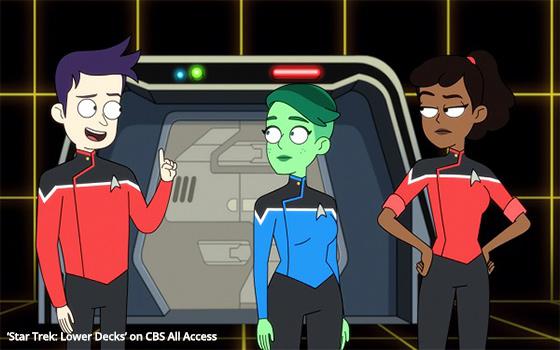 Someday, someone might produce one “Star Trek” spinoff too many.

But at the moment, this does not seem to be the case. The newest wrinkle in the “Star Trek” universe of TV shows and movies is this new animated series coming this week to CBS All Access called “Star Trek: Lower Decks.”

Let me please save you a trip to Wikipedia in case you are asking yourself whether this is the first-ever “Star Trek” cartoon spinoff. I already looked it up. This is the second one.

There was a “Star Trek” animated series on NBC from 1973 to 1974 that featured the voices of the stars of the original 1960s series.

It was the first spinoff of “Star Trek” and also the first “Star Trek” series to win an Emmy (the original series was nominated for numerous Emmys, but never won any -- not even Leonard Nimoy as Mr. Spock, nominated for Best Supporting Actor in all three of the show’s seasons).

Whether or not this new animated “Star Trek” series ever wins an Emmy is of no concern to the TV Blog.

As noted recently in a blog about this summer’s 2020 Emmy nominations, almost everything in the TV universe gets nominated for something these days in much the same way that every child on a sports team receives a trophy even when they lose.

While this new “Lower Decks” cartoon is not aimed at children, it does seem designed to appeal to young adults who act like them. It is a comedy, which may also be a “first” among “Star Trek” spinoffs.

Instead of focusing on the starship’s captain and the other high-ranking officers who occupy the ship’s “bridge,” “Star Trek: Lower Decks” is about the crew members on the lowest rungs of the ship’s hierarchy.

They are the young 20-somethings in entry-level positions who serve at the beck and call of the higher-ups, who they then bad-mouth amongst themselves.

These characters (three of whom are shown in the photo above) have been created to reflect their real-world 2020 counterparts -- young people just starting out in their careers who are forming their first acquaintanceships and career connections at their first jobs.

In the TV show, the characters all talk in high-pitched, overly excited tones of voice -- like hormonal teenagers, and I suspect, like some young grown-ups who are not teenagers but for some reason still talk like them anyway.

It is this group that will likely gravitate most readily to “Star Trek: Lower Decks,” along with all others who see the words “Star Trek” and immediately make plans to watch any new “Star Trek” TV show the minute it premieres or starts streaming.

In this way, “Star Trek: Lower Decks” would appear to be foolproof. CBS seems to think so. This title is the sixth original “Star Trek” spinoff created for CBS All Access since 2017.

Who wants to bet it won’t be the last?