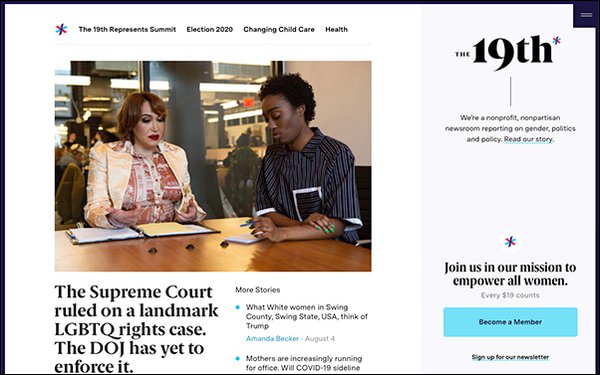 A new nonprofit news site dedicated to the intersection of gender, politics and policy launched this weekend, called The 19th*.

“We are working on storytelling that exposes disparities, discrepancies and the disadvantages that affect women, especially women of color, in our country,” Ramshaw told USA Today. “That could be anything from the role of women in our economic system, in our health-care system and most important, the disadvantages women face in seeking elective office in this country.”

The 19th* also has a deal with The Philadelphia Inquirer to publish its “Portraits of a Pandemic” series. Each week, The 19th* will profile a woman in Philadelphia grappling with the pandemic.

Other series on the site include “Changing Child Care” and “The Electability Myth.”

Named in honor of the 19th amendment to the Constitution — which was ratified 100 years ago and gave women the right to vote — The 19th* launched with $8.5 million in fundraising from donors like the Knight Foundation and Craig Newmark Philanthropies.

The asterisk in the publisher’s name represents the barriers to voting that still exist today, especially for women of color, according to the company.

The 19th* is founded by Emily Ramshaw and Amanda Zamora; both came from The Texas Tribune. They previously served as the editor in chief and Chief Audience Officer, respectively.

Ramshaw serves as CEO at The 19th* and Zamora as publisher.

The 19th*’s business model will rely on donations, sponsorships for live events, digital advertising and paid memberships that start at $19 a year.

The 19th* told Nieman Lab its staff of 22 people is 91% female and 75% nonwhite, and includes residents from Philadelphia, Orlando, Des Moines and New Orleans.

“Our newsroom aims to reflect the racial, ideological, socioeconomic and gender diversity of American voters, and is devoted to covering everyone with empathy,” Ramshaw wrote on Twitter.